Mixed vegetable dumplings from the dough Husband ordered the dinner fried dumplings. And I really want something bright. And since homemade ravioli quietly waiting in the wings in the freezer, the bright I decided to make dumplings. Dough recipe belongs to Evgeny Gusev. As part of the test only vegetables, greens, flour and water. And since the dough is suitable for dumplings, and the filling You can choose any. So, let's add color!

Ingredients for Mixed vegetable dumplings from the dough 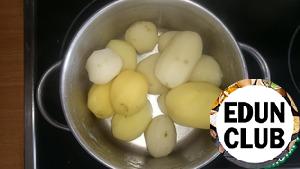 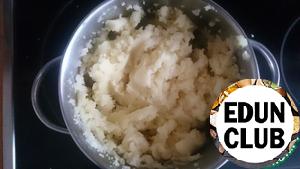 Potatoes sprinkle with salt and crush. Carrots, beets and parsley separately grind in a blender, puree. In greens, you can add 4 tbsp of water to better ground. 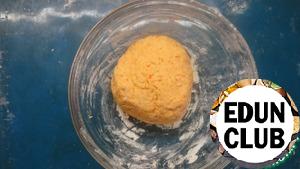 Knead the dough.
Carrot puree: add a couple of pinches of salt, 1/2 tsp turmeric and 200g of flour. Next, flour is added as needed. Knead dense dough, as usual dumplings. It took me about 250g. flour.
Cover the dough with a film and put for 30 minutes in the refrigerator. In a beet puree add a couple of pinches of salt and 200g flour. Next, add flour as needed (I went 230g.). Knead a tight dough.
Cover the dough with a film and put for 30 minutes in the refrigerator. In a puree of parsley add a couple of pinches of salt and 80 grams of flour. Next, flour is added as needed. Knead a tight dough.
Cover the dough with a film and put for 30 minutes in the refrigerator. The dough is ready!
Next, take a portion of dough, roll out to a thickness of 1-2 mm and form the dumplings the same way You.
I beet and carrot dough divided into 4 parts, and the parsley dough into 2 parts. Rolled portions. Part was using the metal of pelmennitsa. As part of the form for dumplings. In this form I like the most, as a lot of toppings coming! Dumplings ready to be sent for 30 minutes in the freezer. Remains of dough roll out. Two-tone and make the dumplings (if using a pelmennica) or just dough. One layer put on the second, roll it out and cut the figures. The remnants of the combine, roll out and then at Your discretion: dumplings or "dummy". Prepare your favorite way. For comparison, one batch of fried: Carrots in the dough is almost not felt, beets and parsley is quite pronounced. Dumplings with bran
109 - - -
Cheese – perfect for Breakfast. Complete proteins in the morning give you energy for the whole day. And for satiety is to cook with cheese dumplings. But not normal, and lazy – so much faster. And bran because it is much more useful! Vegetable dumplings made of choux pastry
91 - 60м 4
I beg you, the sneakers don't hit or throw, you know, the recipes on the site a lot, but... because dumplings never happen, especially with potatoes! Come visit on a favorite dish! Soup with potato dumplings
109 3 - -
Beef broth and dumplings. Quick and tasty. I did a more complicated version because the dumplings did itself.. but you can purchase))) My numerous family of this creation very much... I Hope that you will find useful and enjoy... This is the first recipe post on the site... that is to say, the debut... I hope turned out))) Dumplings with turn
81 - - -
Tasty and healthy dish! Especially important now, in the fall when all the berries were gone, and only blue sloe berries hang on the branches! Replenish the vitamin supply for the prevention of colds, and just eat the delicious dumplings!

Dumplings with cherry
92 4 7м -
A wonderful recipe for anyone who loves dumplings, but who do not have time for cooking. Dumplings are very delicious, but very large: according to the first embodiment of the earpads with the side of 5 ~6 cm, the second - balls with a diameter of 4 ~5 cm. Dumplings speckled "Cilantro"
80 - 30м 3
I dedicate this recipe to lovers of cilantro and homemade dumplings. Decided to share with you this wonderful recipe. To be honest, my husband doesn't like dumplings with cottage cheese, but with cilantro was eating for both cheeks. The dough and filling to be tender and flavorful. Well, here goes. Dumplings with meat
168 3 50м -
Prepared the dough for some egg yolks and ice water - has turned out incredibly delicious. Highly recommend.
More recipes