I really liked the method of cooking meat by long simmering. Slow cocer name turns out to be. And I'm so impressed that he decided to cook the loaf according to their own recipe using this method. That's what I did. Perhaps You will like this method. The roll was very gentle. Celery, paprika, and garlic gives the meat a great taste and aroma. The idea of making thank the cook Natalia konservatorka.

Ingredients for Roll meat with celery

Step by step instruction of cooking Roll meat with celery I will try to tell as much detail as possible. The meat is pre-washed, to dry out. To prepare a layer of meat. I took the external part of the loin. But you can take any, the main thing that was a smooth layer. Meat to beat is NOT necessary. Those pieces of meat that are "kicked out" or SAG around the edges, I cut and then placed inside the roll. Prepared meat, sprinkle with flakes of paprika, sugar, garlic powder, dark pepper and mashed pills the tongue (I did it with the flat side of a knife), salt to taste, on average, Sol is taken at the rate of 1 tsp per 1 kg of meat. If you like salty meat, you can salt stronger. Ascorbic acid I took in a drugstore, the most ordinary glucose. Read in the Internet that it can be used instead of nitrite salt. In addition, she plays the role of preservative. Celery stalks washed, cleaned from the fibres, cut into 4 pieces. As it turned out, the celery can be used more. Evenly spread the celery around the meat across the reservoir.

Roll meat into a tight roll. With external parties add few salt, liberally sprinkle paprika powder on all sides of the resulting roll. Then wrap in parchment tight, as tight as you can. After two days, remove the roulade from the refrigerator, keep it at room temperature. They say that the meat is tastier when it is cooked, not cold. Now it is necessary to remove all used packing. Wrapped in a new dry sheet of parchment, tie a strong thread to the roll is not turned during cooking. Remove the package with the meat, cool, remove all packaging. Slightly dry on a paper towel. Turned out to be such a pretty roll. 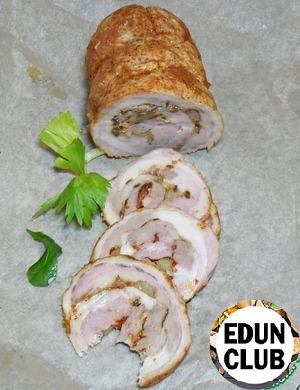 Thanks to all the manipulation of tight packing and tying thread, the loaf turned out dense, well cut after cooling in the refrigerator, lose shape. Stored in dry parchment, in the refrigerator. Good for cold meats, for sandwiches. Yes, and just by itself is delicious! Knuckle "Russian appetizer"
85 - - 6
This dish is inspired by the snacks that is made in the form of a filler. And since I'm not very fond of pork, and was made this option. Help yourself. Sliced chicken fillet "Holiday"
88 - - -
In our family, very popular chicken Breasts. This holiday version is delicious, is dietary and beautiful, by bacon breast remains juicy. Maybe useful to someone? Festive meatloaf
243 - - -
What a festive table without meats? I agree, no)) Prepare the roll in advance, it is possible in several versions, and store-bought sausage will not have to spend. And hardly someone will look at her, if there will be here such a handsome man.))) Meatloaf with rice and chanterelles
85 - 60м 15
A wonderful loaf! Which is delicious hot or as a cold appetizer. More importantly vegetables and herbs... Turkey rolls with vegetables
94 - 45м 6
Such rolls can be done with any crisp vegetables, for example, add green onions, hot peppers, parsnips, or do two or three kinds of vegetables. Cut into circles rolls will be a great appetizer to aperitif. They can be prepared a day before serving and serve cold or hot.