Soup with lentils and smoked Unlike peas or beans, lentils – even the red, though green – no need to soak. It and without that well prepared. The lentils can take any. I had the red – it is considered that it is cooked faster, but I prefer this soup to cook it until soft. Mine was ready after 35 minutes.

Ingredients for Soup with lentils and smoked

Step by step instruction of cooking Soup with lentils and smoked 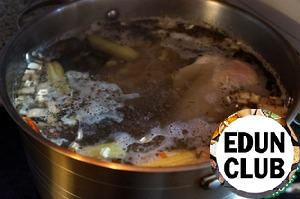 Cook the broth for soup. For this brisket cover with cold water, bring to boil, remove the foam, add the vegetables (if you want to throw another bouquet Garni), hot pepper entirely, reduce the heat to low, just to poulkovo, and cook for 2.5 hours. Season with salt about an hour until tender. Then remove the bacon, eat immediately or keep for later – in the soup we won't need it. Strain the broth or just to catch a skimmer roots and pepper. 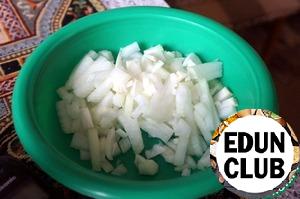 While cooking the broth to make fries. Onions cut into cubes. Send him carrots. A little salt and fry until soft. Pour a ladle of broth, reduce the heat under the pan to minimum. Cover and simmer for 15 minutes. 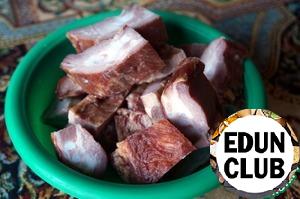 Ribs to disassemble the piece. The broth back on the stove, bring to boil, lower to his ribs, cook for 15 minutes over medium heat. Add to the pot lentils, cook for 35 minutes. About five minutes until the lentils are tender add to the pot sauté to give the soup boil. When the lentils are cooked, omit the garlic with the mustard, stir and remove the soup from heat. Cover, let stand.
Serve, garnished with cilantro leaves and beautiful, and the taste of the cilantro here is the way.
Bon appetit! Soup Julien almost a classic
68 - 60м 4
The name Julien originated from the French julienne, which means "July". In French cooking in the summer season it was customary to prepare the soups for which young vegetables cut in a special way - very thin, fine strips. Since then, this method of cutting is called cutting - Julien. Also referred to as salads and soups, prepared with thinly sliced vegetables. It should be noted that Russian Julien as a hot appetizer with the indispensable mushrooms and cheese to the French Julien is irrelevant. I have sliced a normal dice, so I called your soup is almost a classic. Recipe taken from the book "French Recipes" ("Les recettes de la cuisine francaise") Soup with lentils in explanation "Maagal"
71 - 30м 4
Gave is a thick bean soup, very hearty and nutritious meal, it can be cooked with lentils, waving, chickpeas, beans. Made from red lentils is called Maagal (Masoor Dal), the traditional recipe includes Indian spices and some vegetables. Thanks to a well razvivaem red lentils and the soup looks thick and pretty quickly prepared. Meat soup with dried apricots
75 4 - -
Read the recipe of this soup in the magazine "Most". Of course, modified some of the ingredients "under you". Soup like just REALLY. Delicious, thick, rich. Dried apricots gives an extraordinary taste. The children ate with great pleasure. Soup with coconut milk and shiitake mushrooms
293 - 20м 4
In explanation of Thai cuisine, to the middle of the post is still wanted milk. At least the coconut! Taste the magic, it's just indescribable! Soup with beef and waving
87 - 120м 8
Very tasty and easy to prepare soup based on beef broth with pieces of meat. Lentil soup with celery and bell peppers
91 - 50м 8
When you walk past the lentils in the store, it seems that she's so modest and simple... what delicious to cook from her? To lentils was delicious, and it is necessary to combine it with the correct products and be sure to acidify dishes of lentils. It sour notes enliven the meals from the legumes. And then you life will love this inconspicuous rump, which fills the dishes of tranquility and consumer — pleasant fed warm inside.