The mushrooms in the soup can be any. I took the frozen aspen. For me it's the most delicious mushroom and the taste of the mushroom soup turns bright and saturated. In the soup I'm going to roast vegetables, including: cabbage, and potatoes. 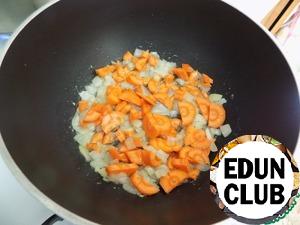 We need to boil the mushrooms first. I took aspen frozen, thawed them, cut and sent in boiling salted water. Boiled 30 minutes. From aspen mushroom broth turns dark, but it's not terrible, the broth for me is the most delicious of all mushroom soups.
I'm going to cook soup in the pot, which initially will fry all the vegetables. I have such high casserole pot with a thick bottom. On the fire, put the pan, pour 1 tbsp oil (second reserve), warm it and spread onion, chopped arbitrarily. Gold him. Then the carrots. Stir fry carrots until until she will color the oil orange. 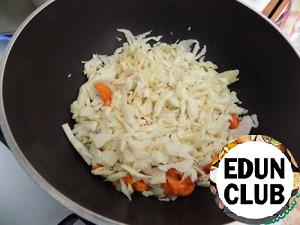 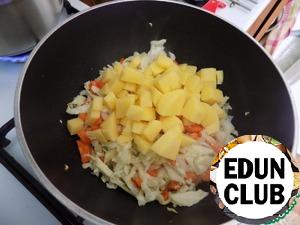 Strain the mushroom broth, keeping it. I put in a saucepan a colander and poured the broth along with the mushrooms. The mushrooms remain in the strainer, and the broth in a pot. Add the roasted vegetables and mushrooms, stir and fry some more. I strongly do not fry the vegetables. Already this mushroom and rich aroma through the house, just want to pour a bowl and eat. Pour salted mushroom broth, which is poured into the pot without mushrooms. Bring to a boil, turn down the gas fire on low and cook under cover for 20 minutes. Vegetables have almost ready. Let it cook gently for a little soup. Taste for salt and doselevel to taste. Stirring constantly with a spoon in the center of the contents of the pot, place the semolina. From cereals we will have the broth more rich and a little bit stringy. Semolina in the soup will be spared! Cook for another 5 minutes, pour the remaining 1 tbsp of sunflower oil cold pressed (it is fragrant, the taste of childhood) and remove from heat. Give the soup to stand, covered, to infuse. 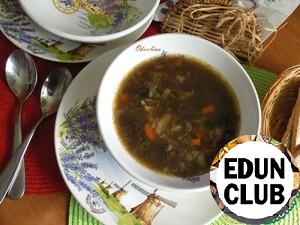 Poured into plates and eat!

Soup "Gentleness-Usefulness"
98 5 60м 10
Awesome tender and delicious vegetable soup! Try it, sure will be satisfied! Kiddies and adults for health! Soup made of shrimp shells
85 4 - -
First time for this recipe the soup I made, purely out of curiosity. I was wondering what happens. What happened, plunged in a pleasant shock to me and my family. The soup turned out tender, very tasty, awesome and flavorful. Every now and again, treat yourself to your favorite shrimp, from the "waste" of indulgence cook this wonderful soup. A little long, but worth it!!! Turkish red lentil soup "Merrimack"
101 - - -
I looked at recipes for similar soups, but everywhere or carrots or potatoes, or all together, and I decided to share with you the recipe for this soup is cooked in the Turkey, I was there and he taught (my mother-in-law), because my husband has something protocoal in the kitchen, I decided to give him a holiday today, all sfotografirovala and share with you. Soup with quenelle of chicken liver
65 - - -
Original, unusual soup. In Hungary a soup made of chicken broth, served at weddings.
More recipes