Today I want to offer you one of the most unique cakes of the Soviet past. We can say that this is one of the masterpieces of the Soviet confectioners. The first time I had a chance to try this cake in Moscow in the mid-80s. the Second time - 7 years ago in Chelyabinsk. After returning home, I started to dig all the cooking sites looking for a recipe, but the cake is so difficult to prepare at home that for a long time, all my search results didn't bring. Apparently nobody wanted to risk it. But after a long search - a miracle! in one of the cooking forums I came across the coveted recipe. After reading it, however, depressed - too difficult. But, on reflection, decided. Alas, the first "damn", as usual, turned out lumpy, and, at the final stage when it was necessary to color the cake under the grill. I put it in the oven, and she started to wash the dishes. Casually, turning his head to the plate, I, to my horror, saw that the oven is blazing fire!!! In General, the top was completely charred. Had to cut what was supposed to be the most delicious. However, my family has stiskala for a sweet soul that remained, and were extremely satisfied. And still the cake didn't let me rest. Week I weighed everything "over" and "against" and took the risk again. The second attempt succeeded, but the desire to repeat substantially reduced. Was supposed to be a very significant occasion, I once again ventured into this culinary feat. Just make a reservation: if your oven has no functions "grill" or "convection", at worst, confectionery burner, you should not even start since the final stage is the process of caramelization. The first part of cake making is quite simple, familiar to most Housewives. Here is the second part advise to be patient and gather the maximum: it is not for the faint of heart! I will try to elaborate on the process of making the cake, but most likely will not be able to consider everything. If the recipe you are interested in, write that it is unclear I will clarify. 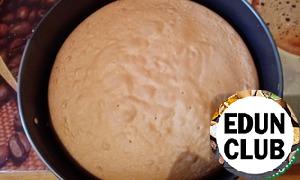 Step 1: biscuit. I suggest you PM to leave in the morning to cool down for better slicing. I did not photograph the process because it is very simple. Separate the whites from the yolks, beat until stable peaks, gradually add sugar, continuing to mix until the consistency of thick cream. Add the egg yolks one at a time, without stopping whisking. Separately mix all the dry ingredients. To enter into the egg mixture in 3 stages, stirring gently with a wooden spatula until smooth. Round form for baking lay parchment, not lubricating anything. Put the dough and bake for 30 minutes at 180 degrees. the finished cake to leave in the form for it to cool down for at least 6-8 hours, ideally overnight. 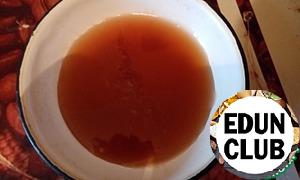 Step 2: impregnation. With the impregnation of the problems, I think, anybody will not arise. Pour the sugar into a saucepan, add water and boil on low heat until the sugar is dissolved. Remove from heat, pour in the cognac and stir. Cool completely. Step 3: cream "Charlotte". First, make the milk syrup. To do this, mix the milk and sugar, put on medium heat, bring to boil and boil for 1-2 minutes. Beat with a mixer the egg to increase in volume in 2-3 times (this is to ensure that the protein is not further curled) and without stopping whisking, pour a thin stream of hot milk with sugar. Continue to beat for another couple of minutes, then return to heat and bring to a boil, stirring the syrup. Do not boil! Otherwise the egg will curdle. When the first bubbles, remove from heat, press plastic wrap to the surface of the breast mass to form a crust and allow to cool to room temperature (not below, otherwise the butter while beating the cream will curdle). When the syrup has cooled, beat the butter at room temperature in a magnificent mass, add the syrup in small portions, without stopping whisking until smooth slickness of the cream. Add brandy, vanilla, cocoa and beat until smooth. Step 4: Assembly. Cut cake horizontally in half, soak, leaving a couple of tablespoons to soak the comb. Distribute the 3rd part of the cream on the bottom cake. Cover the top. He, departing from the edge 2 cm, cut a piece in the form of a Crescent. 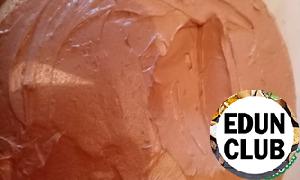 Distribute another portion of cream on the top layer, including the hole, leaving a portion for the comb. Sides of cake with chocolate cream NOT to MISS! 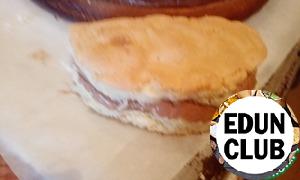 Comb cut in half horizontally, soak both halves, combine cream Install the tongue into the hole, a little indentation in the cream and slightly sloping back, spread the remaining cream and cover the comb. Step 5: protein cream. Powdered sugar mix with vanilla. Separate the whites from the yolks, beat until the volume increases by several times, gradually adding powdered sugar, beat until until the whites will not completely hold its shape. The consistency is about as rustic sour cream high fat content. Shift the cake on a baking tray lined with parchment. Gently apply protein cream on top of chocolate, starting from the sides. Keep protein the cream is not mixed with oil. It needs to completely cover the whole cake in one solid white mass. Especially do not feel sorry for ridge.

Yolks, lightly beat (fork) and very gently applied to proteins from all sides with a soft brush. Step 6: caramelization. This is the most important stage. Turn the oven mode "grill" or "convection" top, put the cake on the lower tier AND WATCH, LEAVING AND NOT CLOSING the OVEN DOOR! Once on the surface will form a brownish crust can be removed. Step 7: final touch. Sprinkle the top with powdered sugar and remove in the cold for a couple of hours. In fact, everything! Sponge cake on proteins
498 - - -
This cake is also called angel, not only because the cut of this pie similar to the color of angel wings, but also for his fragile meringue and soft as a cloud, a biscuit. Cheesecake with "pistachio" cream
305 - 45м 12
Actually the recipe is pistachio. The thing is that the color of the usual custard is very similar to the pistachio, hence the name of the recipe. How to prepare the cream and give it a color, will tell in this recipe.

Swaroski
470 4 - -
I apologize that no photos. Well, I have no camera. This time I want to suggest swaroski. When I was in University, me and my girlfriend in the hostel is often prepared. Rolls dough
0.7k - 120м 15
Dough that always turns out. The filling is very sweet. This is my first recipe, do not judge strictly. This recipe is not found on the website. If there is, let remove. Belyashi are simple
0.6k - 180м 14
Recipes for tat there are many. I propose to cook this is not complicated cakes in my recipe.
More recipes