Etoupe this is a very interesting dish of Creole and Cajun cuisine, which is common in the Southeast United States and has a fairly noticeable the roots of French cuisine. However, the unique culture of the Southeast United States, where there was a mixture of peoples of the North and South of Africa, European Nations had added a unique flavor Creole and Cajun cuisine. Traditionally Etouffe cook in new Orleans - where he serves in almost any restaurant. Etoufe is often made of crayfish tails or prawns. Based on this recipe I took the recipe for a great chef cooks Emeril, Lagasse. I offer Etouffe shrimp - pretty spicy, extremely flavorful, spicy and tasty dish. Usually it is served with crumbly boiled rice. This dish is good as a separate dish for the second or as an appetizer, but you can also serve it as a hearty Breakfast. Cook the rice. It needs to be loose, to well absorb the sauce. I cooked in a large amount of water. Thrown into boiling water and cooked 15 minutes. Then threw on a sieve and washed. 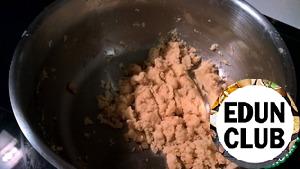 Take a saucepan with a thick bottom and begin to make a thickening Roux. To do this, melt the butter over medium heat (to not burn), add the flour and constantly stirring with a silicone or wooden spatula heated to light brown/rechevogo color. It is important not to let the flour burn. 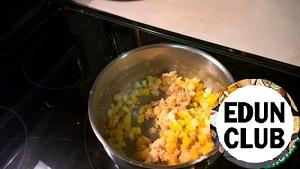 Add the garlic and heated until the appearance of a garlic aroma, about 30 seconds, stirring constantly - so it doesn't stick 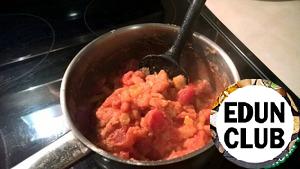 Add all spices, salt and sugar Cook on low heat, stirring occasionally - until thick. The consistency should be like liquid sour cream In the original recipe for shrimp prepared in hot sauce, but they are prigotovlenie "rubber". So I cook them separately.

To serve, spread on a plate the rice, next put the finished shrimp and pour the sauce on top - partly for rice and shrimp. Sprinkle top with green onions. Octopus salad/Salada do polvo
144 3 60м 4
Delicious appetizer salad of octopus with olive oil and parsley, perfect for a healthy and balanced diet. Squid in Chinese
62 5 30м 6
Favorite dish of my family. Home as soon as there squid - all in one voice shout: "I Want in Chinese!". Very tasty obtained kalbarczyk, hot and cold (I like cold a lot more!). Paella with seafood
46 - 45м 4
Paella is one of the main dishes of the Spanish cuisine, it can be a different vegetable, seafood mixed, but the main ingredients are rice, sweet pepper, garlic, saffron and olive oil... Skoblyanka from cucumaria
77 - 180м 6
Cucumaria is a marine invertebrate animal. Externally this animal is more reminiscent of fleshy piece of hose, hence its second name– "sea cucumber". Meat cucumaria is distinguished by a special, nothing on similar taste. It has a dense structure, but it is quite soft (overcooked cucumaria acquires the consistency of jelly). The smell of "sea cucumber" is also not pronounced, but pleasant and unobtrusive. In addition to excellent flavor cucumaria has also medicinal properties. The meat of this animal's chemical composition is a unique product.

Risotto with squid "fried"
70 4 40м -
I apologize in advance if this recipe is already there. Mother-in-law was advised to prepare the pilaf on this recipe. Tried. The rice was not even washed, but it turned out SOOOOO crumbly. And the cooking time less, the family didn't even know when they had time to prepare. Salad "Pearl"
69 - 30м 5
I come up out of the sea And desire to perform. Pushkin's fairy tales read it? So, you recognized me And exclaim with a smile: "Hello, goldfish!" On the nose the New year! Let me make a gift for you from the bottom of your marine Kingdom - the black Pearl. Pearl is one of the gems, and I would like to decorate your Christmas table, but you need to work a bit...
More recipes