Fish, stewed with wild mushrooms and cream can brighten any dinner. If you already welded mushroom soups, sauces done, napajeni pies with mushrooms, and the quantities of mushrooms from the freezer do not stop, you can try another option. The idea came from Yulia Vysotskaya, but with its own modifications with respect to the local flavor. Help yourself!

Ingredients for White fish braised in mushrooms and cream Start with the mushrooms. I thawed mushrooms (water from under mushrooms don't pour!) and I realized that they are not enough. So we added the same amount of brown mushrooms. Ideally, of course, only a noble forest mushrooms - boletus, aspen, mushrooms. But in the absence thereof it is possible to take and store, but then it would be good to add the mushroom powder (grind dried mushrooms). In General, coarsely chop the mushrooms. Kids in General were left intact. Mushrooms to spare, there should be many, not for the smell. 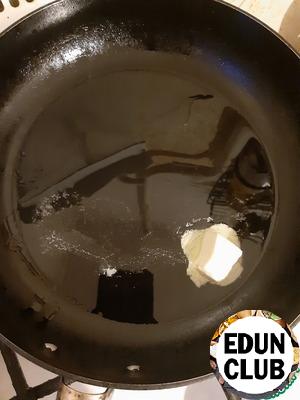 Pour into the pan vegetable oil and add a knob of butter. Finely chop any negorci shallots, red or white. Dump into the pan, fry until transparent and add the chopped garlic. After a couple of minutes add the sliced mushrooms, season with salt, sprinkle a little dried thyme and pink pepper. Give the mushrooms a little ozolotilsya. Cover don't cover. Now about the fish. Suitable fillet any white fish - Dorado, sea bass, burbot, flounder. I have 2 small river some salmon. As a whole weighed less than a kilo. And removing the bone, left 600 grams Once the mushrooms are browned on one side, put the mushrooms on top of fish skin side up. Gently sprinkle with salt and pepper the fish. You can sprinkle it with vegetable oil.
Now the liquid to extinguish. I mixed water from Ryzhikov (sorry to spill) and soy sauce. Poured gently into the pan under the fish, added a bit of wine, covered with a lid and left to prepare. It will take about 15 minutes, depending on thickness of fish. The trick is that the fish is lying on the mushroom pillow and not the pan. After 15-20 minutes check the fish and pour the cream. You can even sprinkle with thyme or put a few sprigs whole. 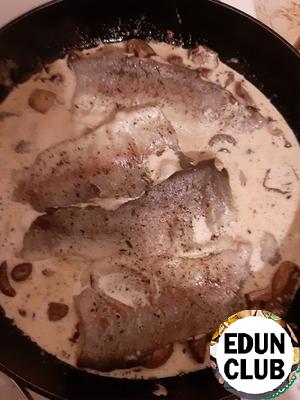 Leave on low heat until boiling cream. Then turn off and leave under the lid for a few minutes without fire. 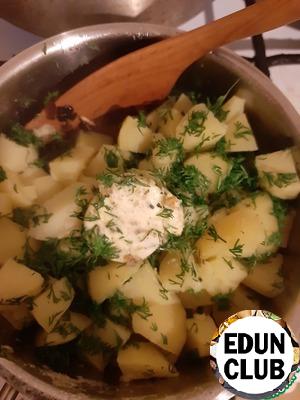 While fish buhteli under cover, in a parallel world were boiled potatoes on the side. This is optional, if desired.
And I potatoes cut in small cubes and let her be soft after boiling as it should, then merged and added dill and spicy mushroom butter (butter, finely chopped mushrooms, garlic, chives and a few drops of truffle oil in the freezer). I brag about... Well, in principle, all can serve!
Bon appetit! Caramel salmon
78 - 30м 4
This unexpected recipe I read in a magazine the Deli. On Your Desk and offer the salmon in caramel with spicy spinach. Incredible taste!!! Burgers pike "Tenderness"
252 - 60м 4
All the same, the addition of bacon makes burgers, not quite fish, and you want it to pike, tender cutlets. Especially if the fish You are 100% sure: You have a family fisherman and indulges You with delicious autumn fish ( I think that autumn is the most delicious fish). Here's my fisherman was glad and he pleased me. You can come back... Hamsili risotto
78 - 120м 6
Offer You to try pilaf with history, but rather with the fish, the love that glorified the Sultan himself. The inhabitants of the black sea coast are very popular fish – khamsi, it is no less popular and we have sprat or anchovy. However, this fish has graced the tables of sections of the population with very high incomes. Her meet was on the menu high-ranking persons, neither in old nor in modern times, meanwhile, on the black sea coast to that fish, which is the nurse of fishing families, a special attitude. Sultan Suleiman the Magnificent, the most loved is, of hamsey. The love for fish was so great that on the hilt of one of his blades, he commanded to engrave a motif depicting of hamsey... On the authenticity of prescription do not apply. Turned out surprisingly delicious, crunchy layer of fish, and inside a great pilaf. Salmon on "green cushion"
78 - 40м 4
Here's the recipe today, turned out two recipes. Very simple, quick and tasty. The idea of the recipe thanks to Svetlana and Olesya. Fish with vegetables and mustard sauce with broccoli
91 - 60м 2
Tasty and very simple. Fish "Sucks"
101 4 - -
We have named this fish not because it is bad! :-))) But because its preparation is used a hell. Interesting and very tasty combination. Help yourself!!! Catfish, stuffed mushrooms
115 - 55м 6
Meals of catfish almost as I love to cook, as meals of burbot. The second preference for many reasons, but catfish on the table – welcome. Often I baked whole sleeve or just an open pan. You can pre-stuff the fish with garlic, add salt and white pepper spice. You can do not to do it – just salt, pepper and bake. Will invariably good. In this case I decided to stuff the fish with fresh mushrooms. Even fried they are gone, only salt and fish and the stuffing. And, of course, added white pepper, it to the fish at the time.
More recipes