My family members recently do not favor the purchase of sausage and sausage-hunting, and I'm borrowing the idea of the package of sausage from chef Lumina (say7 ), quickly got down to business. 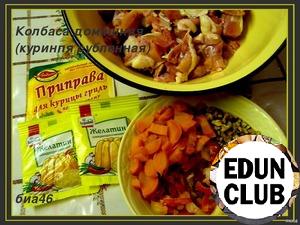 The original had three legs, which I washed (after cutting the meat from the bones 1 kg), cut into cubes 1.5-2 cm, pepper and carrot sticks, nuts broken by hand into small pieces. In a large bowl, mix minced meat, vegetables, nuts, salt, seasoning to the chicken, grated garlic, gelatin, instant (to pour out from the pack, do not dissolve in water!) And begin to form our sausages using edible film to roll film, put 1/4 of the stuffing and wrap the sausage, twisting the film on the stuffing, as tightly as possible. 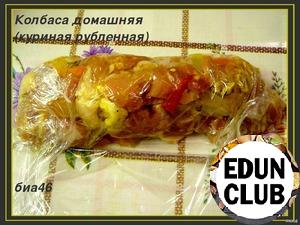 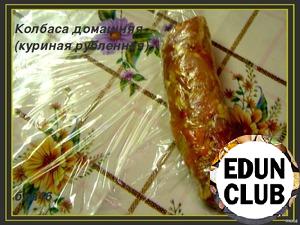 And try to twist the film around the sausage in different directions to wrap it more tightly. Hands oblavlivaemye film from all sides, total of 4 sausages. But as I feared from the film spilled the juice when cooking, be safe, put each in a new package, squeezed out the air and tightly tied. In the morning, after standing in the refrigerator the sausages were submitted to the people, who, appreciating the taste and naturalness of the product, quickly wiped the strategic reserves. Chicken rolls with Korean carrot
66 - 60м 8
This combination of products I like very much! I hope you enjoy it! Italian-style chicken
229 - - -
This dish is perfect for those who are watching their diet and figure, but will appeal to those who love a tasty meal. The chicken turns out delicious: tender, juicy, dietetic, with an excellent side dish For the recipe thank you E. Menshikova "Recipes for an Encore" No. 2 (7) 2008 Burgers " Pozharsky"
66 5 60м -
Incredibly juicy and tender patties. Long did not dare to cook them, as it deterred the ingredients: what kind of meatballs, in which there are no onions or garlic or even pepper! But having prepared them once, I realized the meatballs to be! And now they quite often appear on our table. "Wandering" around the site were very surprised that these cakes paid so little attention: whether the search is not working, or I badly searched, but found only two recipes that are completely different from mine. I must say that the recipe comes from the cookbook, so that claims about the authenticity of the author. Chicken with potatoes "easily"
106 - 120м 6
It was evening, prepare not particularly desirable, but necessary. Many times already cooked chicken in its own juice, but the chicken still needed a side dish. To bother - Oh, no. So this recipe was born out of laziness. Turned out delicious, hearty and nutritious. Hot dish "Chicken of the roses"
60 - 60м 6
Since the Eighth of March - it is, after all, women's day, cook for yourself, loved ones, here is an easy and low calorie dish. Plus, it looks amazing and, undoubtedly, will decorate a festive table. Chicken sticks in sesame seeds
166 3 - -
Once upon a time did something similar, only in the seeds of sunflower and then came across a similar recipe in "Cooking workshop". ... Here repeated. Chicken with apples in the sleeve
114 - 30м 4
Simple, but really tasty!
More recipes