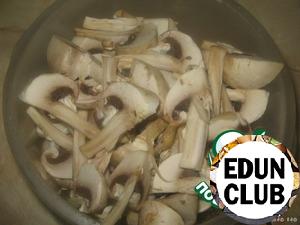 Mushrooms cut into large pieces. I cut into 4 pieces. 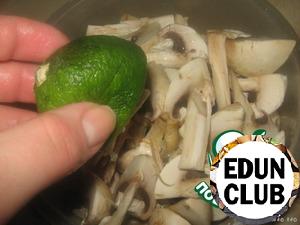 Squeeze the lime juice. You can use lemon, but lime gives its own unique touch. 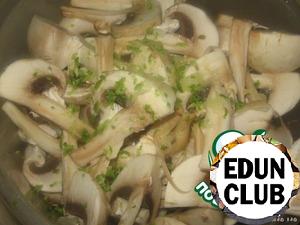 Grate the zest of lime. With a half will be enough. 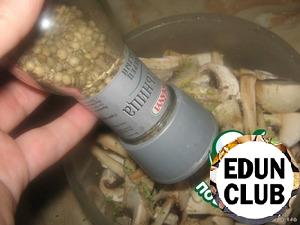 Drizzle with a little olive oil. I marinated in a plastic container, because I was convenient to mix it, just cover with a lid and shaking the container.
Leave to marinate for at least an hour. 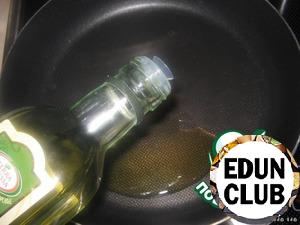 After an hour heat the olive oil. And to put to cook the spaghetti. I boil them in salted water with olive oil. Spaghetti I have absolutely lean as part are only flour, salt and water. When they are cooked, drain and drizzle with olive oil. Not giving him much to overheat, just send in oil coarsely chopped garlic. Fry until Golden and remove. It is needed only for flavor. Fry the mushrooms in the oil until Golden. 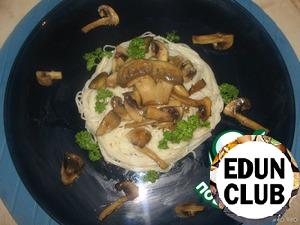 Serve with spaghetti and garnish with herbs. Rice with mushrooms in a creamy sauce
54 - 40м 4
Want to share a recipe for quick and delicious dishes. Fast - because we use already cooked rice that is left in the refrigerator from some other dishes. :) The rice use long grain, parboiled. It's not risotto.

A La chicken otbivnoy
98 3 30м -
The taste is really very similar to fried chicken. And actually... Sherry mushroom fricassee
62 - 20м 8
The perfect pair to chicken wings fricassee of mushrooms in a delicate aromatic creamy sauce. Prepared quickly, with a minimum of ingredients, and the taste is amazing. Mushrooms can take any, and fresh and frozen and meats from different species of fungi. "Sunflowers"
192 - 35м 4
This dish can be eaten without forks! Children should be like! Mushroom Bourguignon
74 - 60м -
What is Bourguignon? This is one of the peasant dishes that have taken root in "Haute cuisine". Classic Bourguignon is made from slices of beef in a thick wine sauce. It is traditional, but not often eat French cuisine. I offer you a vegetarian version of Bourguignon: mushroom. Potatoes baked with mushrooms
71 - - -
Potato goes well with mushrooms. This dish can be prepared and after post. Then you can sprinkle the potatoes with cheese. Buckwheat with mushrooms and leaf beet
62 - 30м 4
The usual combination of buckwheat/mushroom with a vitamin and a flavoring agent. Breakfast of Champions
69 - 10м 2
I suggest you make a simple, healthy and tasty Breakfast. Takes about 10 minutes and is capable of charging power and energy for the whole day!
More recipes