It is very tasty! Pear, honey, nuts, shortbread-honey pastry... for the contest "world of animals". Melt margarine,add sugar,liquid honey,vanilla,egg yolk and starch,mix well.to defer 1.5 tbsp of this pulp in another bowl.The remaining mass add cocoa,mix well.in both mass add flour to make very stiff dough(if the dough is cool enough when baking rolls down on the pear!tested!). Cover the dough with a cloth and leave for 30 min. While the dough is resting prepare the filling.pear peel. Crushed nuts mixed with honey, so as to obtain a very thick mass. 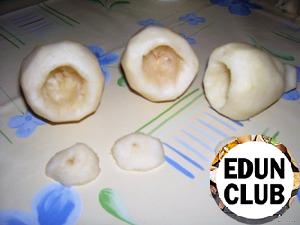 The pears with a sharp knife, carefully remove the core and make the cavity bigger. Cut the core to cut off the lid. 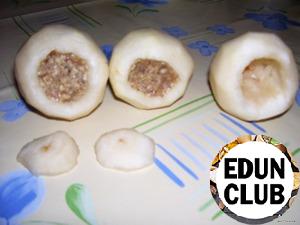 Nuts filled with pear(tightly) and the lid close. 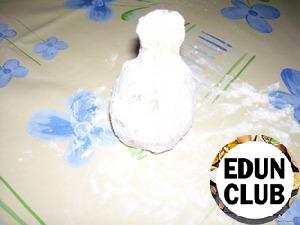 Pear roll in flour (this is to ensure that the dough does not slip down while baking, as pear extracts the juice). it is already checked,so I warn you! Take a piece of the dark dough,mash to form a circle(in the middle thicker than the edges).in the middle put the pear and ableplanet dough over so that the visible was only the tip.Layer of dough to about 2-3 mm. Dark test formed the head of a bear and put it on top of the pears. Of pieces of dark dough do the lugs. From pieces of light dough make a face,circles under eyes,circles in the middle of the ears.to the face of the fill spout of dark dough.and the bright circles for eyes clings to the dark circles of the dough smaller. Dark test do the tail and paws, hind legs and to cleave to the soles of the bright test. On the sole cling to the heels and toes of a dark test. On top you can put the forehead(to make the dough circle on it and a few cuts with a knife). And here is another bear.bake at t 180C for about 35 minutes(focus on your oven). The finished bear to paint with melted chocolate smile,eyes,nose,paws, and forehead. but in the context of... Bags "Surprise"
98 - - -
The stuffing can be made any: eggs with green onions, beef+rice, potato+mushrooms. We made bags of fruit. I think these bags quite suitable for a festive children's table. And as a culinary surprise for each guest, you can prepare your bag with your favorite filling. Yorkshire puddings
105 - 60м 4
Little magic. In the ordinary oven the batter turns into baskets! Great base for weekend Breakfast! Recipe from the book Irina fadeaway "Wonder-baking" Pies with salmon
91 - 120м 11
Delicious pies of dough in the serum, but it is possible and on the water. For the filling, perfectly pink salmon in cans. Pies produces fragrant, soft (despite the fact that the dough is easy). Cook often, and always with the same result. Served with the first dish and not only. Tea is also a good choice.

Swiss cheese buns
151 3.5 - -
This recipe I saw in a magazine from a neighbor. Did and the result exceeded all expectations. Oatmeal cookies "Sandwich with chocolate"
68 - - -
Delicious, aromatic, crisp, easy to prepare cookies. It has a large number of oat flakes. Healthy and perfectly complements your morning coffee or tea! Gentle oatmeal Apple-pear pie "Diet"
84 - 45м 8
For those who love rich crunchy bulk pies! You know that our website has many recipes bulk pies, and yet for the first time, dare to share and your recipe. Place the recipe, wanting to help those who "alas" it is impossible semolina, not white wheat flour and it is impossible to get addicted to sugar! And oatmeal - on the contrary recommended! Maybe he will like those who have diabetic! This gentle, I would even say "wet" pie-dessert is my favorite! My wand, when I want in wet weather to treat yourself to a hot tea with homemade cakes.
More recipes