Stew this doing since Soviet times (tady know how it was? get, seize more "Pro stock" and how to store? Uh-uh, no, frozen foods were not, and there was a tiny freezer in the refrigerator, which included 1 chicken... am I already so old, ugh!). So we were forced to come up with any kind of "necessity is the mother of invention!" Broke banks only 1 time - the chicken from the bones are not separated, but it is combustible tears flowed... And good luck

Ingredients for Stew meat "should."

Step by step instruction of cooking Stew meat "should." 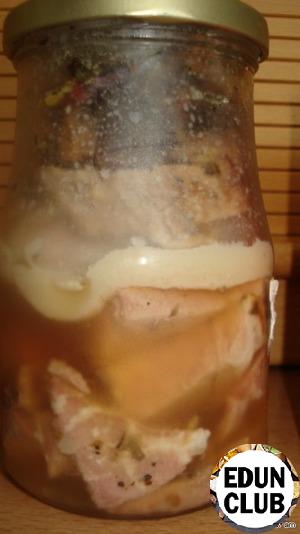 Prepare:
Meat separated from the bone is required, extra fat (some still remain) and films to remove.
Cut the meat into nice neat slices (the chicken can not cut and leave the pieces as they were left after separation from the bones).
In a deep bowl, mix salt and all spices (to taste) - allow to stand.
That hour from the bones and scraps to cook the broth and strain. Cool.

Banks to sterilize.
Fold meat tightly, trying not to leave any voids. The meat will release the juice. If the meat is covered with juice, then fill with broth.
Banks close, spinning, but not quite tight, not until the very end... Commercials, so palovartija left to screw... 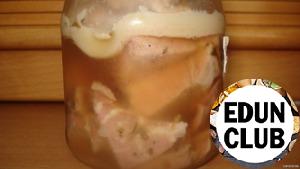 Put jars in a deep pan, pour water (in the pan, of course), this construction is put in a cold oven. Tek-with, now we need to cook the stew at a temperature of about 108-110° how to achieve? Or do you have a thermometer for the oven or - as I do - cut in the oven a bit taller than 110°, because (as I found) what is stated on "control panel" the stove does not meet its "internal data" (just as in us humans). The cooking time of the product depends directly on the meat (chicken rather than 1 hour, a maximum of 1.5) for pork, veal and lamb from 1.5 to 2 hours for beef at least 3 hours) - and note! - the countdown is on when the desired temperature! If anyone is really quite old-fashioned oven, the output (ehma where our Sov will be lost?) - you will see how the meat juice boil from the banks from here and went...

At expiry, the banks take out and immediately "dosagethe" flip - after 5 minutes, flip them over (sorry!) "back" allow to cool: you can eat or store (preferably in the cold, I mean in the fridge).
If you plan to store longer, then the next day - a little insurance - repeat sterilization in the oven. Stew "Home"
464 - - -
Do You like stew? I - YES, I just love it!!! But now somehow scared to buy meat products in stores, don't know what they put in it... And meat you want... And why don't we make a stew at HOME? Because we can choose what kind of meat to use, add spices according to your taste and desire... the Meat turns out tender, juicy and, most importantly, natural! Forward to the kitchen! Homemade stew
392 - 180м -
I want to share with you the most simple and, at the same time, delicious option for homemade tostock. In the holiday season for me is the wand, when in the country and so enough worries, but also need a family to feed... and at home a jar is never superfluous does not happen. Harvesting of meat "Eurma"
0.6k 5 60м -
The Arabs do not canned meat, and prepare the minced meat or small pieces of meat, filling them with fat. Very tasty. With this stuffing very tasty scrambled eggs and beans, and other vegetables. The samosas are also very tasty from army. Home-made duck
384 - - -
Since this year we have bought to celebrate 10 utey, we needed ways to preserve them, though not in original form))), but that summer the work went on smarku. Prosherstiv the Internet, your favorite website "cook", after examining my husband a lot of recipes for home-made stew, we came to the conclusion that we need something radically different, alternative stew. Why? Canned meat canned in a pressure cooker
479 - 130м 8
Found on this site briefly to this recipe Gostovskaya stew cooked in an autoclave. But the autoclave is a thing rarely found in the kitchens of ordinary people, but his younger sister is a pressure cooker even easier! And now I've mastered thanks to the old forums, former Soviet, and now residents of Deutschland and forum "yaplakal. ru" production of ordinary Soviet stew. Such a typical, familiar since the development of the Soviet Arctic, loyal companion in all life situations from the camping trip, to the cottage to prepare dinner. In the photo from left cityfone little chunky pork stew, beef lean to the right. My brand fat
0.6k - - -
Once the recipe of this amazing fat shared one remarkable woman from Belarus, it was her family recipe. Now this recipe is my signature fat, tastier which could not be found in the neighborhood. Thanks to this recipe the fat in my house has always, loved it all "from small to large", because it is soft, tender and incredibly flavorful.
More recipes