Birthday husband cooked a lot of Goodies, but the hit dish was gruel! Neizbity, tasty and easy dish. About Kulesh V. pohlebkin wrote: "Less common than the borscht, the Ukrainian national dish is a porridge - palupera-polyvore".
The proportions and method of preparation I indicate your.
In boiling water showered washed millet, cooked until soft.
Photos came out dark, steam is prevented. 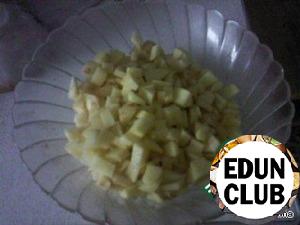 Meanwhile, cut potato cubes and added to a semi-millet. Cook until cooked.
If the water was not enough, dobavljaca hot water. Porridge should be thick soup, but a little less than a mess. Highlights Kulesza - cracklings! Here is the meat I took to make them.
The fat with the meat then does not hurt! The meat is washed, be sure to dry out!
Cut into pieces The pan put on medium heat, put the meat with the fat and heat to obtain fat and viarenich pieces of meat, at the end of salt.
Add chopped onion, fry until tender. The greens served with the finished dish.
I was not allowed to sleep "bread plates" from Svet32lana (recipe 27539). Therefore, using the recipe of her wonderful plates, I made them for filing Kulesza.
The guests were delighted! Help yourself to health! Bon appetit! Pork in beer
147 4 120м -
There are many recipes of pork in beer, but all challenging and I love it simple but delicious. Try 5 minutes on the stove, after 2 hours, - soft, delicious meat with an unusual sauce. But if the meat you will be served sauerkraut braised with apples and tomatoes, but with beer... yum!! Homemade sausage
147 - 60м -
We is the most anticipated dish of the year preparing for New year and Christmas. Cooking for family and wanted to take part in the competition "Family dish of the year", but unfortunately, not all Pets were not conscious - shy! So - see and swallow saliva out of the competition! On the website this recipe is not found, but in our family it long ago. Pork chop cutlet
117 5 30м 3
It's a big hamburger, which I built to whip the hands of what was, but you can vary by changing the filling :-) Pork "Lunch for Senator"
69 4 120м 4
Very tasty, tender meat. Recipe taken from German magazine. Tried it and on the same day, rewrote the recipe in my little book, so God forbid not lost. :)
More recipes