An Apple for dessert When I in the childhood was fond of carving... so decided to remember... only to have Apple))) When beginning to cut, the recipe was born by itself... So I suggest it for the contest "Sweet taste of summer".

Ingredients for An Apple for dessert

Step by step instruction of cooking An Apple for dessert 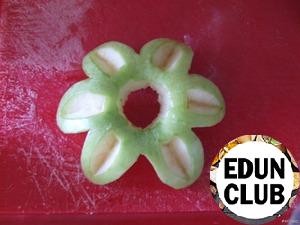 Now cut along the contour of the petals of the extra flesh of the Apple to make like a flower. Then in the middle to cut the hole. Now take the bottom part of the Apple, we need to pull out the flesh... As I said, set for carving I have, so I did the following - cut with a knife in a circle, and then a teaspoon was trying to get the pulp. The main thing is not to cut through the Apple through. From the pulp of the Apple removed the core, and the rest shredded.

The crushed Apple pulp is put into the pan, and then decided to add a banana. I finely cut. Added two tablespoons of sour cream. Put on a small fire and stirring occasionally cooked until thick sour cream. Amazing smell, flying around the kitchen, he brought my lover who was asked to make with a little sour dessert... And I added to this mix the lemon juice ;-). In General, when the cream has thickened and appeared slightly brownish tint, I added sugar and all are well mixed. With apples cut off the top. Fruit dessert from semolina
314 - - -
Dear cooks, I want to share with you the recipe of a delicious dessert made of semolina. Two weeks ago, I treated a neighbor and took her a recipe I've made it five times already! That includes semolina nobody knows! Changing the fruit component every time we get a new dessert! Tastes like ice cream! Go! Help yourself!

Sherbet
164 4 - -
when you want for dessert, tasty treats, and regular ice cream are already tired, you can prepare this sorbet here New year Mandarin oranges in spicy syrup
154 - 120м 4
Tangerines -a little sun in the skin. There is a sign accurate the people: meet the mandarins in December - so the New year already on the way. And the imagination will revive from childhood a familiar picture: the tree in the middle of the room stands a green pine needles, the tangerines. In the name of "the Mandarin" root "Dar" is inserted on purpose though. Is it not enough reason to give you this fruit?! Pineapple cheesecakes
123 - 30м 3
This unusual version of cheesecake for those who like and even pineapples. Vanilla-pear dessert
144 - 15м 4
I really like this recipe, cook it long and often))). Spied in the magazine "Peasant" once, thanks to the author. Dessert is simply prepared, eaten with pleasure and fast. Especially good to apply it to coffee. Dessert "Cherry passion"
157 - 30м 3
Hello cooks! Today I come to you with dessert. Many of us love the combination of cherries and chocolate. It is very tasty! Prepare this dessert for my family. Easy, fast and Negroponte. The sponge cake is baked in the microwave for five minutes. Cherry, I prepare in advance. Served a La carte, dessert bowls. Delicious dessert in a few minutes ready. Help yourself to health! Bananas in sesame caramel
104 5 20м 12
Chinese sweetness in the competition "the Sweet taste of summer." This is a very delicious dessert! The main thing is to eat it in the next hour, until the caramel is not soaked. 's get cracking? (Recipe from the Deli)