That's such an unusual snack today I decided to cook. Don't know suitable or not for competition "Vegetable traffic lights", because green is I had an onion. In General, see for yourself, but the taste - very tasty ; -) Take the cherry tomatoes (you can, of course, and the usual tomatoes, but then I think they will be better peel) cut in half and remove the seeds. 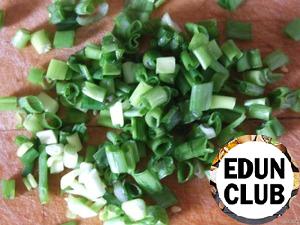 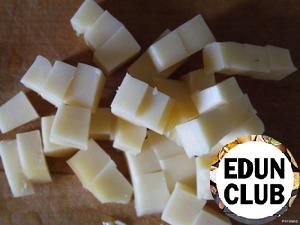 Cheese cut into small cubes so that they fit into the tomatoes, you can, of course, and grate it. 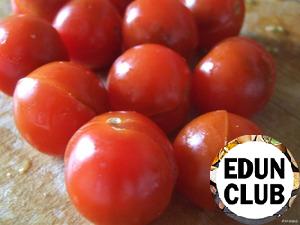 Now combine our halves of tomatoes and yet set it aside. Take onions, cleaned and finely chop it. In frying pan, pour vegetable oil and fry onion for maximum heat when it has turned Golden brown, put the fire on low and let it roast.
We gotta do this pepper. Then I removed the skin and removed seeds, finely cut him.
And now back to our Luke ;-) In it I put salt and flour and everything is well mixed and slightly fried, stirring occasionally. When flour has acquired a Golden color, I added pepper and cream. All well mixed and cooked, stirring occasionally, 3-4 minutes.
So... did we just do something like sauce...
Now back to our tomatoes. Take two plates and one bowl. In the bowl place flour and breadcrumbs, and an egg into a bowl and salt and a little shaken. Take the tomatoes and roll it in flour, then in egg and finally in breadcrumbs and put it in the fryer. Imported and forgot to take a picture of the process of sending in the frying ;-) Potatoes in soy sauce
139 - - -
Sweet potato in Korean is very simple. And the taste of potatoes is unusual and piquant. If you don't know what to make of potatoes for the Christmas table, then this recipe is just right. Appetizer "the Vegetable song and soloist eggplant"
135 - - -
This snack doing every year since her marriage more than 36 years))) Maybe someone is doing the same and nothing new I will not open, but maybe someone will be useful - juicy, fragrant, delicious, not marinated, rich snack, make a lot at once and never lie, and always disappears first! Try it! A fairly common set of products, but you need to adhere to this preparation, no need for speed to combine the vegetables together - get that flavor, what I'm talking about! Eggplant baked with cheese and chickpeas
129 - 75м 4
I want to offer the cooks to cook eggplant with cheese-chickpea filling, baked in the oven. This spicy appetizer is very tasty and tender. Pickled stuffed peppers-Velikie Luki
235 - - -
Amazing appetizer! With meat, with potatoes, a glass of a cold one! Aromatic and spicy pickled vegetables, no vinegar – continuous use. Here is a delicious zucchini! Well, the peppers are incredible! And rassolka is my weakness...)) Go - all tell, show and buy!