All recipes » Desserts » Other desserts » Jelly Ingredients for Jelly "Taste of summer" 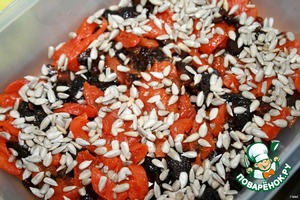 Prepare the first layer of the dessert.
Soak the gelatin in water. Blackberries mix with sugar (2 tbsp ) and bring to a boil.
Add the gelatine ( 1 sachet), stir until dissolved gelatin
and cooling.
Prunes, dried apricots, chop, put into a form and sprinkle the cleaned seeds. 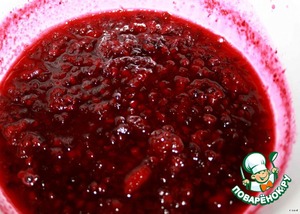 On top of the fruit mass to put the BlackBerry puree and put into the refrigerator, if frozen. 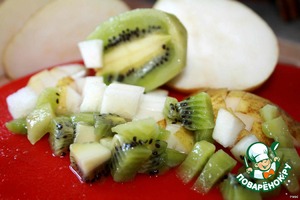 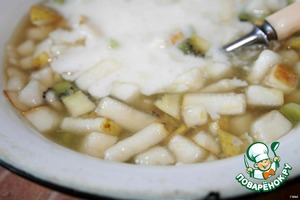 Now prepare the second layer of dessert.
Gelatin (2 packets) to soak in the juice, heat to dissolve gelatin, but do not boil.
Mix with sliced pear and kiwi, and a little cool. Blend sour cream with sugar ( 4 tbsp )
and add in fruit mass. Pour on first layer and again put into the refrigerator until complete
solidification. 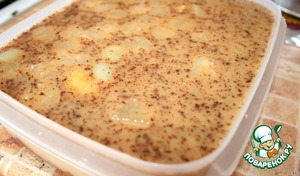 And finally, make the third layer of the dessert.
Soak the gelatin (2 packages). Mix the yogurt with the sugar (3 tbsp ) grated chocolate. I added a little extra
instant coffee and pineapple compote. Heat the gelatin and put it into the yogurt. Cool and pour the second layer of dessert.
Put into the refrigerator until fully cured.
When the dessert is ready, form with him to put in hot water for a few seconds. Flip
on a plate cut into slices and serve. 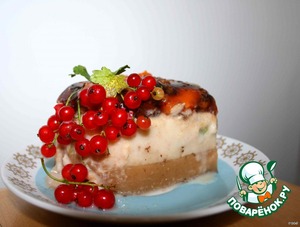