Dumplings with plums in the Impressive. Recipe from Pani Helenki The time has come for the ripening plum, a cherry plum, sloe... Fertile time to cook a seasonal dish for the sweet tooth and lovers of fine food. The birthplace of the city of Katowice the Katowice province of Poland, Brest and Grodno region of Belarus.

Ingredients for Dumplings with plums in the Impressive. Recipe from Pani Helenki

Step by step instruction of cooking Dumplings with plums in the Impressive. Recipe from Pani Helenki 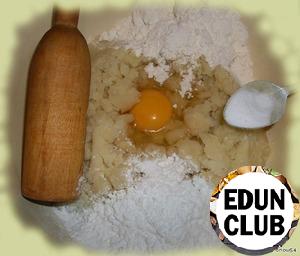 Prepare the mashed potatoes,let cool, grind it through a sieve to get rid of unwanted lumps. Drive into mashed raw eggs, add flour, starch, salt to taste and mix enough dough.. The plum (cherry plum, sloe) make a surgical cut and carefully take out the bones, so that the fruit is not divided into slices... 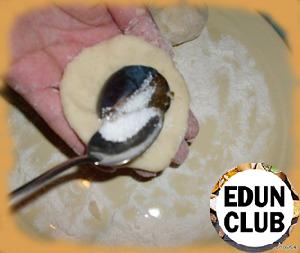 Of dough first, roll the balls with a diameter of 3-4 cm. then the balls plusem in small lepeshechki stacked they operated a fruit, in the cut fill with sugar to taste, or half a teaspoon of honey... 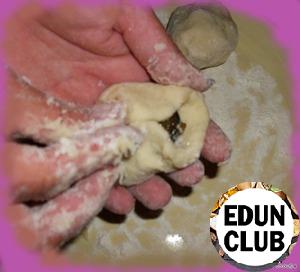 Carefully pack our sweetened with fruit, not leaving even a small hole... Roll without squeezing ,occasionally sprinkling with flour, our dumplings in the palms, forming a neat ball. Do not get carried away, makatite 10-20 dumplings and send them in boiling water! Otherwise the juice from the fruit will find its way out and completely spoil your culinary creation. Submerging the dumplings in boiling water, do not forget to stir them to ascend... otherwise all your culinary creations will stick together and can stick to the bottom! Once all the dumplings druzhnenko surfaced in boiling water, note the time and cook for 5 minutes. 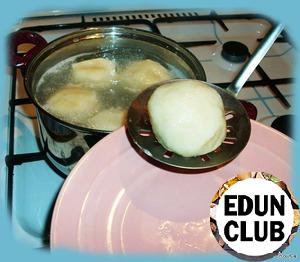 After a five-minute penalty in boiling water take out of our "swimmers ready" on the dish, profusely thick sour cream, sprinkle with lightly toasted in butter panirovochnymi hot biscuits and serve. 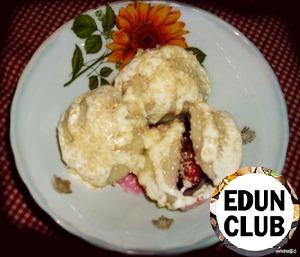 I like this dish with sour cream and heavily sprinkled with a little toasted sesame seeds! Knedli with apricots
84 - 40м 10
Topfenknоdel mit Marillen. With this dish, for me, began with the acquaintance with the Austrian cuisine, which has grown into ardent love. Long searched for in various recipe sites, very similar in taste to those of Vienna, dumplings until we stopped. Dumplings mineral water
78 - - -
I want to tell you about the test on the mineral soda water, quick to prepare, very cool work, and not least the delicious boiled and fried. I learned and tried this dough recipe, now a dumpling cooking pleasure. Dumplings are very frequent guests at my table. If you have inspiration I cook a big batch of dough, mold and freeze. Very comfortable and like a wand wand for lunch or dinner. Dumplings with meat
138 3 50м -
Prepared the dough for some egg yolks and ice water - has turned out incredibly delicious. Highly recommend. Dumplings with chicken liver
119 - 30м 4
When you want something delicious and healthy, not fried. Soft potato-cheese dough, sweet fragrant filling. Try it! Everything is done quickly. Dumplings
91 3 10м 2
Easy and quick cooking lazy dumplings of cottage cheese... you Can serve them like sweet and salty, with butter and sour cream. Vareniki with potatoes, eat with a big spoon
99 4 60м -
"... Patsyuk opened his mouth, looked at the dumplings and even more gaped. At this time, the dumpling splashed from the bowl, slapped in the sour cream, turned over on the other side, jumped up and just hit him in the mouth. Patsyuk ate again and opened his mouth, and dumpling the same order went to again. Only he took the trouble to chew and swallow", "Evenings on a farm near Dikanka" However, in Gogol's dumplings were still fat.
More recipes