I want to share my recipe soups team meat, almost a classic, but with the addition. Maybe someone will be useful. Put to boil the broth. We remove the foam. An hour later start to do the blank – Breese. Finely chop the onion, it should be a lot and passeruem. On a large grater shred the carrots. Ideally, it is not added, because it simplifies the taste, but I like it. And send it to the onion. At this time, chop the tomatoes, and put to carrots. While the vegetables stew, take out the meat, cut and send back to the broth. Cut the potatoes and sent to the broth. While ideally the potatoes are used, I like it. By the time of Breza cooking the potatoes boil. By the way, it is possible to correct the density of the broth, if it is watery - just grate and add to soup. Broth salt. 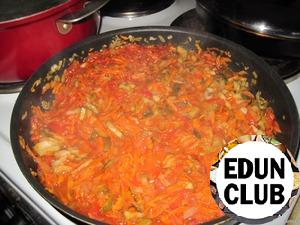 By this time the vegetables were petosiris, add to them the tomato. pasta, shredded cucumbers. They should be sturdy, salty, and even better cask. 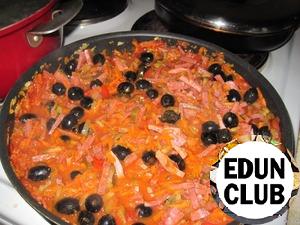 And there also send the sausage. In my freezer there is a "magic box" in which are collected the remains of the meat products. Anything would be less fuss, immediately cut into strips, and when it is filled, bake a pizza or make a hodgepodge. Add black olives, pitted. Add the juice from the olives, but not to overdo it, because brez is supposed to be stringy. As soon as the cucumbers will become soft - brez ready. 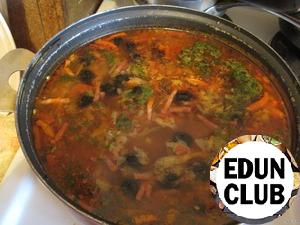 Now add the billet into the broth and bring to a boil. Then add the capers, Bay leaf, parsley and the soup is ready. Solyanka
352 3 90м 4
Suggest to your court your recipe soups. Very tasty! Team she by the fact that this recipe I gathered from a few taken from the Internet, through trial and error it turned out this. Soup-Solyanka
0.8k 5 30м 6
Long live "Pink sea". Very fond of Mediterranean food! But today I cook Russian soup Solyanka (on its own). The site already has recipes for the dish. I hope that my will not be superfluous. Solyanka fish "Royal"-a budget option
333 - - -
Husband asked to cook soup, and the son - fish soup. And I wanted something unusual. Have been through your posts and on the Internet, I found three recipes fish soups, but none of them did not suit me. Decided to dream up for myself. The Foundation took the recipe of team meat soups. The site has few recipes for fish soups, but without any step-by-step photos, or very different from my version. So do not judge strictly. Options cold soups in General, sea... "Budget option" ' cause I used salmon and haddock (cod, perch). In holiday version need salmon and sturgeon. Solyanka
301 5 - -
Offer its own version of such a widespread specialties like Solyanka! Solyanka Siberian
375 3 - 4
Today we eat soup broth of lamb (usually it's beef broth, but want something that pays better). The broth I still have Monday and is in the fridge :) Solyanka on my way
0.6k 3 60м 10
My husband loves the bag. I read a lot of cookbooks, watched a huge number of cooking sites to cook the most delicious and viable option for our family. PS Put a little tomato, so the color is not quite juicy. In the recipe you bring the right amount of tomato. Solyanka chicken
313 - 60м 8
Traditionally this dish is cooked in a strong meat broth, with plenty of smoked meat. But in the summer you want lighter food, that use chicken broth, just a bit of bacon and fresh tomatoes - almost dietary halophyte. Help yourself.
More recipes