Recipe from vitoria with a little of my changes are Very tasty, tender, just melts in your mouth. The competition "School time" Preparation of biscuit:
Preheat oven to 180 degrees.
Whip the egg whites and add powdered sugar.
Sift all dry ingredients together and fold into proteins. Cover with baking paper a baking sheet and evenly spread the mixture.
bake for 20 minutes.
Cool on a wire rack. 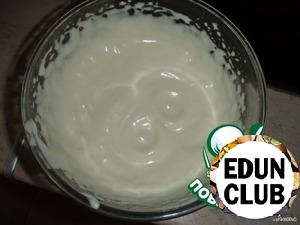 Preparation chocolate mousse:
Whisk the yolks.Bring sugar and water to a boil and pour in a thin stream to the yolks.
whip until the mixture cools. 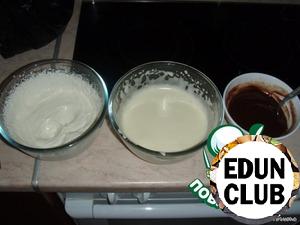 Melt the chocolate and stir in to the mixture of yolks.
Whip the cream and add to chocolate yolk mass. 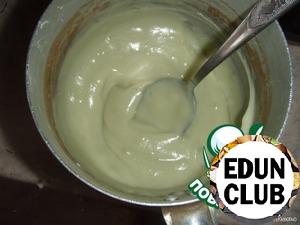 
Cooking vanilla cream:
Soak the gelatin in water and leave to swell.
Heat milk with vanilla pods.
Mash the yolks with the sugar,add the starch and powdered sugar.
Pour the milk in a thin stream into the yolk mixture while continuing to whisk.
Return mixture to fire and cook until thick(stirring constantly). Heat gelatin until dissolved and add half vanilla cream, half the chocolate mousse .
Whip the cream and add the cream.
Stir well.Cool. Build:
Line a rimmed form a transparent film so that it performed at 5 cm above the upper edge
Put of the package a layer of mousse around the edge of the shape cut the sponge cake into two halves of length of the form,but narrower.
Place one strip of chocolate mousse Fill with mousse between sponge cake.
Put a layer of vanilla cream on a sponge cake
Put the second strip of cake. Complete vanilla cream
cover with wrap and freeze for 4 hours.
Invert the dessert on a cutting Board,carefully holding the film.
Cut the film down the middle and remove the half of the film
Sprinkle the open part of the log with cocoa powder
remove the rest of the film.
Chocolate frosting cover the second half of the log ( 100 grams of chocolate to melt with a few tablespoons of cream)
put in the middle of the nuts,chill and serve dessert to the table. Biscuit "Honey"
77 - 90м 12
I love cakes, tried many recipes, but got to this cake, although I did see a recipe on the website Eat at home 3 years ago but it was developed to make it. And I'll tell you, I liked it very much. The recipe is very interesting and not difficult! Sponge cake is a honey cake. For the recipe thank you Oxana Cake Nostalgia
153 5 60м 8
Sometimes there are such dialogue:-Mom, do you cake on a cool evening, baked in the fifth grade!! Great son you're 19, I think I remember what it was a cake!!?? Very tasty with sour cream - that's all I heard for clarification! Well , let's try to remember a delicious cake!! Vitushka cinnamon
87 - - -
This is perhaps the most famous popovers of my middle son. Cinnamon, caramel, crunchy and soft at the same time, sweetly melting in your mouth. The dough was dense, but the crumb is quite porous and soft. And the aroma filling the apartment, just great! Cakes "Envelopes of happiness" with chicken and mozzarella
85 - 50м 4
Very easy and delicious recipe for baking with chicken. Such "chain letters" a rich, juicy and light at the same time! Bon appetit! Orange cupcake
104 - 60м 6
Orange cake which friends and family get me for every holiday. It turns out very tasty and juicy. Cake "first Version"
126 - 90м 8
Want to cook a delicious and beautiful cake for his birthday, so you need to practice. This is the first version of the cake. It turned out very tasty, tender and soft. Cake "Taffy"
116 - - -
Not found on the website of this recipe. Very easy to prepare the cake, but so delicious!! You can easily apply for a festive table.
More recipes