School time –an amazing time in the life of each of us... not Easy, but at the same time, the most beautiful! I want to be remembered not as a mundane educational process, and small, joyful episodes like this naughty cake, prepared for the members of the school of puppet theatre, in honor of the opening of the new theater season. The competition "School time" 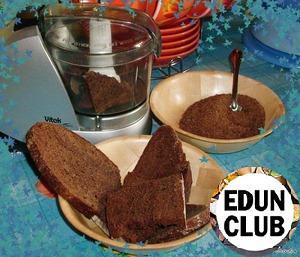 Dough for cakes and other parts of the cake I prepare is not quite the usual way... Never used any leavening agents and food additives. Put the sourdough in a glass of warm milk, 2 cups flour, 4 tablespoons sugar, 50 grams of baking with natural yeast, let stand in a warm place for a couple of hours. For dark cakes, in advance to buy a loaf of black rye bread, cut into thin slices, dried biscuits, dry biscuits slightly browned in the oven and grind into a fine bread crumb. In approaching the dough add the eggs, melted butter, 100 grams of honey... give everything a Good whisk until smooth and foamy mass. Divide roughly in half, for dark and white dough . For white dough, add 200 gr. semolina . For a darker dough, add 2 tablespoons cocoa and rye crackers. Let stand a couple of hours and add in a batter of flour, mix to desired thickness and place in a warm place for another couple of hours. Biscuits and semolina gives the cakes a very interesting, unusual shade . While preparing the dough, make watermelon... Cut separately the core and the flesh, with the crusts cut off the outer green hard rind, cut all into slices of 1 × 1 cm, add 200 gr. honey and a little sugar, put on to cook on low heat, stirring, until fully cooked honey candied fruits. Soak 100 grams. food gelatin in two cups of warm water and put on a steam bath until dissolved gelatin 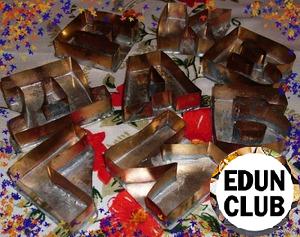 Coming up the dough for dark cakes roll out into a thin layer on the bottom of the base size of a split form and send it in to bake with the chopped letters from thinly rolled dark and white dough. The letters I cut that such homemade forms, but can be applied to an alphabetical set of sandboxes, which can be purchased at the toy store. Laid on the bottom of a split form of a baked round cake from a dark dough, spread on it the candied fruits, which are pre-added 6-8 tablespoons dissolved gelatin and chopped fresh or canned pineapple. Good promycelium the lower crust honey fat from candied fruit and spread, as seen in the photo, triangular cookies sides of cake. On top of candied pineapple and spread a portion of baked letters and cookies, on top of the impregnated tuketim the honey and pour a thin layer of cottage cheese and cream ground which prepare the following: Finely crumble 2 packets of cheese, add three cups of cream, a Cup of honey and half of the remaining, cooled gelatin. Beat all into a thick foam. 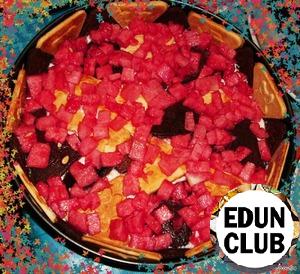 On top of the cream cheese fill, spread another layer of cookies, mixed dark and light. On top of the cookies spread small cubes of watermelon the core and fill tuketim medcom... then again, cottage cheese with cream and on top chocolate covered baked letters. On the inner perimeter of the inscriptions turn of the oiled Whatman paper cylinder with a height slightly above the size of the letters fixed in the rim of a stapler that does not spin, set on the cheesecake base, inside the cylinder put the letters and fill in the void of the watermelon cubes with the pineapple and pour prepared watermelon and honey jelly, which prepare in the following way: Pressed and filtered watermelon juice to mix with 150 grams of honey and a second remaining half of the dissolved gelatin, the color was more saturated, you can add the blackcurrant syrup... Just make no mistake committed by me... Give a little to harden jelly , and already pozastaven fill the void . too runny jelly leaked out and filled the letters of the text, which is not desirable. Put the cake overnight in the fridge and in the morning pull out, remove the split mold, paper ring, cutting it with scissors in a few places... On the top base of the cake we put funny picture colour caramel from the syringe and carry quickly to the school to traditional tea party dedicated to the opening of the new season! 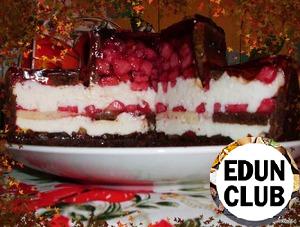 This cake is unusual and laborious in its execution, because it is intended for special children who can see the details of this little culinary joy, only at its... groping hands. Poppy-cottage cheese cake with raspberries and currants
0.8k - - -
Be sure to make this beautiful cake. Pellets poppy looks wonderful on a white background and bright red "cap" sour raspberry and red currant. The cake will especially appeal to those who love poppy seed cakes. Cake "Cloud"
342 - - -
Delicious cake with tender curd cream. Decorate your holiday table and will delight family and friends. Baking on March 8, here put on your court; ). Help yourself! :) German cake "Melting"
270 - 50м 6
In explanation Schmandkuchen sour cream pie. Cheese base, covered with an unusually tender and delicious melting cream. The amazing technology of the preparation (cream based and baked at the same time), and for its taste. Came to live with us forever!!! Cheesecake "Strawberry"
266 - - -
This recipe gave me my friend. When I tried it - I fell in love with it! Delicate, fragrant, very tasty. I recommend everyone to try to cook it is not difficult. Of course a lot of recipes... But I decided to upload my own version. P. S. It is possible to prepare with any other fruit (peach, apricot, mango, etc.), but for me the perfect combination of flavors with strawberries. Therefore, during the ripening of strawberries - this cake is the king on my Desk. Cheesecake "Melted"
191 - 180м 6
Cheesecake "Fused" with a delicate silky texture is a very delicious dessert. It is very airy, light and melt in your mouth. Cheesecake is very easy to prepare. To the table it is served chilled with fresh berries, raspberry sauce, just sprinkled powder or a watering caramel, chocolate. Cake cheese "In search of excellence"
247 - - -
Perfection - the highest degree of harmony.. is it Possible to reach perfection at least in something? We constantly strive for perfection in life, in culture, in his own shape, but still a lot of things.. On a cooking website, perhaps every 10 says that his recipe is an ideal that is not always true. During the life of the site I tried a lot of recipes of cheese cakes, some like more, some less, but the desire to find the perfect option left. Here is another experiment in this search created such a cake. Very gentle, creamy and airy, with a small chocolate and biscuit layer. Prepared a total of 30 minutes, well, the night my dessert in the fridge, taking the desired shape and consistency. You are welcome to our hut :)
More recipes