Offer recipe appetizer of eggplant. I did it three weeks ago but had not posted the recipe for the same reason that I did this snack for the first time and wanted early to try it myself and then post to you. The appetizer I really liked. The taste is spicy, spicy. I did it a little, but after the test will do more good that the eggplant is still there.

Ingredients for Caponata (No. 1 )

Step by step instruction of cooking Caponata (No. 1 ) 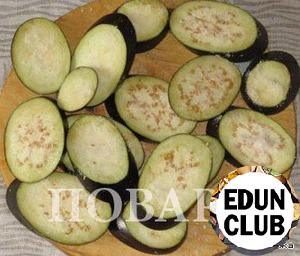 First, prepare the eggplant. Wash them well and cut into slices of medium thickness. Heat the oven to 200*. Eggplant spread on a oiled baking sheet and put in oven for 20-30 minutes. They should be soft but not burnt. Eggplant out of the oven I forgot to take a picture. While the eggplant bakes, prepare the blend of seasonings.
Onion, garlic and chili pepper clean and free from seeds(for pepper). And cut into cubes.
Put on the fire a frying pan+ a little oil. Once the oil has warmed up at the same time put the onion, garlic, pepper, and warmed, 2-3 minutes. Then add mustard seeds, coriander, fennel, cloves and Laurel. Well warmed up another 5 minutes and disable. Prepare the marinade: heat the honey(on low heat) vegetable oil, vinegar, salt. Stir and bring almost to a boil. As soon as bubbles begin to appear-off. On top pour the hot brine and immediately close the lid tightly. Allow to cool and store in the fridge. You can eat to start in three weeks. Pie, quiche "Lawn"
338 - - -
Healthy and delicious pie will appeal not only adults but also children. Unloved baby vegetables can be very successful to disguise in juicy preroga.. It taste like any fussy, both adult and young. Appetizer of green tomatoes
260 - - -
The end of August – beginning of September, this is the time when tomatoes no longer ripen and threaten their owners are about to get sick by late blight. But don't throw them away ( I just bought) – they contain a lot of vitamins, minerals, acids, amino acids and lycopene, serotonin and quercetin. I want to reassure those who read or heard about SOLANINE: first, to get poisoned by them, a healthy person need to eat 10-15 fresh green tomatoes in one sitting, and secondly, the content of solanine in them can be reduced to almost zero. While enjoying the great taste of various snacks from this vegetable. I suggest the easiest recipe used for many years. Tempura mushroom and cabbage
484 - - -
Tempura is something from Japanese cuisine. I cooked it with vegetables, mushrooms and shrimp. You can prepare tempura vegetables and other... Sun-dried aubergines in the marinade
232 - 360м -
And I'm still experimenting with eggplant. This recipe met by chance on the Internet, no website, no the author does not remember, but very grateful. The eggplant turned out spicy and flavorful, interesting daily snack which is not ashamed to put on a festive table.
More recipes