How did I ruin a good recipe and got great bread! I looked the recipe in the net - it was a Hungarian potato bread, I'm on fire to bake. The recipe does not even cite, because I've done things, from the recipe of scraps left! Took out only the idea to use the potatoes... the Recipe given on the yeast, but it was said that the real Hungarian baked bread on hop leaven. Here - I'll hop on!!! Resolved - done! About the hops... the hop Cook sourdough - recipe taken from Internet.
1 Cup of hop cones pour 2 cups of water and simmer until the liquid is evaporated by half. Once cooled, strain. Add 1 tbsp. of honey (sugar) and flour to make the dough thick sour cream. Cover, but not tightly, and leave for 6-8 hours.
I did as was told. Left for the night - I think what it will be? bedtime future even visited my sourdough - like, zapatillas. 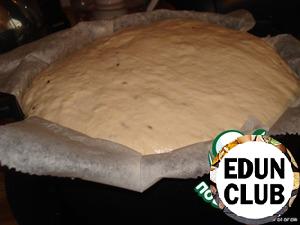 Began to press down and see that something out of it formed into impossible, the dough was air, all in the bubbles, just the balloon... I got the cauldron a little more, thin lubricated Rast. oil and put baking paper, but so that the edge sticking out (find out why...), put back the dough, brushing hands, too Rast. oil. Covered another upside down pan...
Through an hour and a half as he looked - all hands on deck! Coming soon from the cauldron will come out level (more than 3 times here!). What was it? Failure? Or luck? The bread turned out extraordinary! I baked a lot of bread - different and delicious! but this some REAL! - with a crust plump with makerom derjavin and elastic. Well, bread is just like in my student days. Oh, prevmessage, bread-prehledy real! 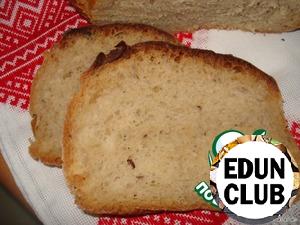 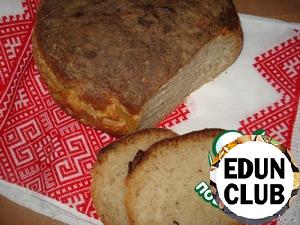 Ciabatta - Italian bread
312 3 - -
Delicious porous bread, low products, BUT to prepare it you need to be patient. To make, do everything slowly and thoughtfully - the result is worth it. Lemon bread for tea
257 4 - -
Offers flavorful bread for tea, coffee... who he loves. I have left from the previous cooking some lemon Kurd, and so I found a use for it. Took the recipe from the recipe book to the stove and a little experiment. White leavened bread
361 - - -
Secrets from the Richard Bertin. At the time, I was lucky to become the owner of luxurious books of Richard Bertinet ""Dough. Simple Contemporary Breads". So, I started reading and ... my world turned upside down!!! I will try to explain. Everything that I previously used in the production of yeast dough, you can safely forget;))) the Approach of the French Baker is quite different. The dough he's not working, and carefully and can say that gently flexes in hand, in no case do not throw it on the table, as recommended by many of our cookbooks, and most importantly, yeast. Well, let me step through all the talk, it will be much easier. I had to make some minor changes. I hope the Richard Bertin forgive me!!! To start I decided to prepare the dough for white bread. Bread honey nut
388 4.5 - -
A delicious and sweet bread for Breakfast. We liked it very much! Recipe found on the Internet. Sorry I don't remember the author, but very grateful!!!