Another bread recipe on your court. The crust turns out very browned and crispy due to the fact that by the end of baking the cheese in the dough frying. But the crumb is very tender and soft. The taste is interesting because at first felt a gentle creamy flavor and then the finish remains spicy "spicy". In a small bowl dissolve yeast in water, add 1 tsp of sugar. Stir and cover with a towel and leave for 6 min. Top should be formed that such a "cap". Pour into the bowl of the mixer cream (half with yogurt), add the remaining sugar, salt, soda, egg and a Cup of flour with a slide.
Pour in the yeast mixture and stir with a mixer on low speed 30 seconds.
Then increase speed and beat another 2 min. 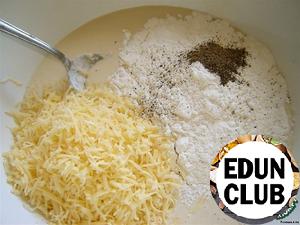 Stir in this mixture, the remaining flour, cheese and pepper.
The thrill can put a little more black pepper or add a pinch of red bitter.
Stir gently with a spoon. 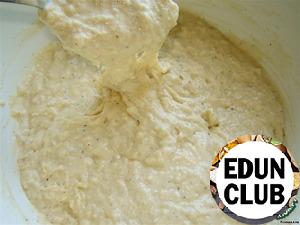 The dough will be quite liquid. 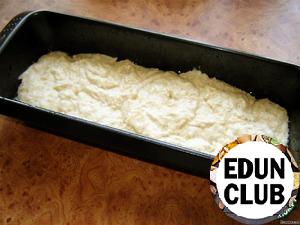 The amount of dough is for 2 average shapes for the bread. But since I got big enough, I it was enough.
Spread the dough with a spoon directly in greased with vegetable oil form.
Cover with a towel and put in a warm place for an hour.
As you can see, my dough took not more than 1/3 of the form. And in an hour has risen almost to the top.
Maybe this is my contribution. The fact that our house is a long-standing one law: the kitchen is always empty until, until I come up something to cook. Exactly five minutes around me start to herd all lived our home and even the cats. All immediately begin to die - who by hunger, who by thirst; who is strongly imbued with sympathy for cats, and begins to feed them, and someone is just bored.
And this whole farce rattles, knocks and argue until my bread or cakes try in vain to rise %).
But today I was determined to hold the Fort during the whole hour, not letting anyone in the door. And who broke under my watchful eyes did not dare to utter a word :-) Multigrain bread lean
165 - - -
Useful bread so good to eat adults and children. This is not sweet bread, but not crackers. Although the crunchiness of the bread depends on your preferences. Rye sourdough bread
159 3 - -
The bread on rye sourdough with no added yeast. The bread turns out very soft, with little acidity, the inherent rye bread, well toasted and crispy. Russian black bread
105 3 - -
Recipe from the book bread recipes for my bread maker under "Recipes." Dark bread with a strong taste of spices, perfect for making toast and as the basis for smoked fish or for the original sandwiches for Breakfast. Very tasty. Irish whole wheat bread
146 4 - -
A very unusual (at least to me) and interesting combination of tastes of usuma and cumin. The result is very pleased, turned out better than I could imagine. And here eat, eat his entire family can't stop. Baton
111 3.5 120м 10
In explanation of the recipe with the Cook. I am very happy!Done quickly, it turns out great - crispy crust and tender crumb. For beginners Housewives or in the absence of the bread machine this recipe is a godsend!And how my daughter liked this bread! Round homemade bread
94 - 60м 6
She did not expect that just like at home you can bake this incredibly soft, tender, flavorful bread. Thought, seeing that there is in the economy, added spices, seeds, bran - was very tasty!
More recipes