School Board.. her we were called teachers, we were inseparable, even during breaks... a symbol of self-expression, writing and erasing. The contest "School time".. 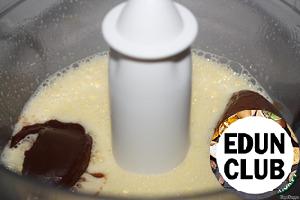 Mix all the ingredients for the dough+3st. L. condensed milk (boiled) Pour the batter into a greased and flour prosyanoy form.
Put in preheated to 180°C oven.
Bake for 30-40 minutes 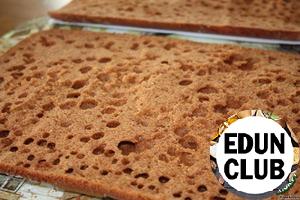 Split the cake into two parts 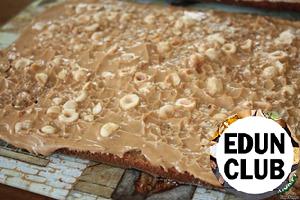 For the cream beat sour cream with the remaining condensed milk. Fluff cake, sprinkle with nuts, cover with the second Korzh

250 grams marzipan mixed with black dye, I used a natural dye-based ink of cuttlefish (barely found)))
For the line used marzipan+yellow dye+pen pastry.
Pencil of the same mass as the ruler+the tip of the black mass and another tip-"eraser"out of marzipan, colored in pink color+silver foil from a chocolate 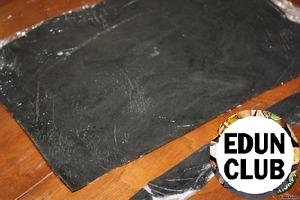 Marzipan mass is easier to roll out mardu two layers of cling film, then cut off the excess, remove the upper layer film, put it on the cake so that the bottom layer was the top, and remove the second layer of film, decorate the sides with chocolate cream (whipping sweet curds with cacao) In my backpack always was an Apple, I never wanted to take it, but mom insisted.. but then we cut that Apple with a plastic knife for clay, to divide all the girlfriends.. and it was delicious, but a little)))...
Leaf do green clay... Oh, marzipan)) "crayons"- white marshmallow Cake Apple-cherry
25 - - -
A light delicate cake without eggs and dairy products. With Apple and cherry fillings and decorated with tangerines and ready Lenten biscuits. Pineapple-mandariny cake
90 - 60м 12
Juicy and refreshing cake with sweet cream will be the perfect end to a holiday on a hot day. Honey cake "gay spiders"
69 4 - -
Rich, beautiful and very delicious cake. Unlike many honey cakes cakes don't need to roll out, and they poured into the shape of a ladle. Try it, you'll like it. Cake "Ballerina"
105 - 120м 9
Recently was looking for something in my recipe book and came across a cake my mother often baked in childhood. Thought, and why I don't bake my baby a cake just for the birthday, and suddenly this recipe will be passing them generation to generation... the Cake though butter cream, not heavy, moderately sweet and very tasty! Cake "Big break"
137 4.5 60м -
Near our house is a school.. and although I go it's late and daughter's early, but we couldn't resist and in unison with all the jovial children almost spent the whole day at a school meeting (first thing in the morning.. then a day.. )...what all beautiful.. elegant came 1 Sep.. everything was painted black and white.. the boys are simply black suits with "butterflies" and Gallucci girls in dark skirts and pinafores, and, of course, emphasized the solemnity of the event the white color: shirts and blouses, bows, socks and knee socks... And in the evening watching your favorite movie "Big break" and singing favorite actors have prepared a birthday cake: rich Dark chocolate and white coconut donuts... the taste of which emphasizes coffee cream toffee and freshens cream ice cream... Despite the two types of cakes and cream cake is prepared quickly and eaten even faster.. For the competition "School time"
More recipes