Namangan Damali burning. A very unusual variant of pilaf. This risotto is cooked in Uzbekistan, mainly in the Namangan district. If you want to surprise your guests, prepare this. Chop the carrots into julienne and the onion into half rings. Boil the rice until half done
chop the onion finely and mix with minced meat.
Season with salt and pepper, add chopped parsley.
Stuffed with minced bell pepper. Pour oil into the cauldron, throw in the butter pieces onions, overtempered. When the onions become dark brown, take it out and throw it away. 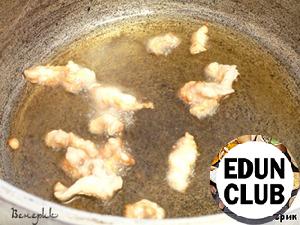 Lay sliced onions in the cauldron. Bring it to Golden state. The bow throws carrots. Overcook minced, until the carrots are just becoming Golden brown.
Need to make sure that the vegetables do not stick to the bottom and the walls of the bowl. Stuffed pepper put in zirvak, bring to the boil and simmer gently for another 20 minutes under the lid. After a time, to laying the rice, put a few heads of garlic. Washed rice to fall asleep in the cauldron. The water should cover the rice by about 1 cm Sirvac should not be mixed with rice. To add to the fire. Until the water boiled away, try the salt, if anything, to add.
The water should boil evenly on normal heat (between medium and strong). Once evaporated the water (to find the evaporated water, you need some time to hit a skimmer on the surface of the pilaf, and you will hear a dull sound, the rice becomes loose), rice with a skimmer to collect by the middle of the slide, make the hole with a stick in several places so that water on the surface, went to the bottom. This will help you better upreti pilaf.
To turn off the gas. Then cover the pilaf with a lid wrapped in a towel, rice should be closed very tightly.
The time needed for cooking pilaf depends on the variety of rice. For evaporation, it is sufficient for 20-25 minutes. All this time the cover is NOT OPEN!
Lid pilaf, ensure that the droplets of water flowing down from the cover, was not included in the pilaf.
When the risotto is ready, take out the first peppers and garlic in a separate plate.
Mix thoroughly and spread the risotto in a large dish.
On top of the pilaf, put the peppers and garlic.

Brew green tea, invite the whole family at the table and Bon appetit!

Pilaf can be served in the bowls, putting each serving in two of pepper. This master class from my husband))) I only took pictures.
Pilaf is his strong point))) Pilaf recipe Marina Borodina
107 - 120м 8
I saw a group of about a hometown recipe of this "divine" pilaf. One photo caused drool)))Dare to try to cook.. it was easy, fast and DELICIOUS!!! Pilaf
140 4 40м 6
Hi All! Everywhere I go, always spasat about cooking pilaf. On how to pour water. etc. to Cook pilaf is a science. Is the mistress that will learn, she will not be prices. I'll teach You. Give You my recipe. My version of pilaf
89 - 40м 6
Delicious crisp fragrant rice with a sweet aftertaste. Rice with mushrooms
103 3 1м -
After the holidays I wanted something tasty and low-fat with salad and vegetables => planned out + tasty ; ) => the greater the number of mushrooms, onions and carrots - so delicious!!!
More recipes