A bit time consuming, of course, I did for a birthday. For fishing maker.. 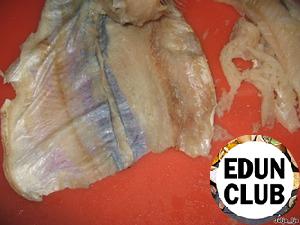 Pike clean, gutting, wash, cut off the head and tail. I had a simplified version, my fish was gutted, scaled and decapitated in advance. Because I just carefully remove the fillet without damaging the skin, and remove all the bones.

Gelatin, meanwhile, soak in cold water according to the instructions on the package. There is nothing I will not write, because the manufacturers are different. I can only say that it is necessary to focus on a liter of broth. 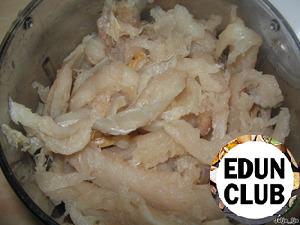 Next, fillet mince. I shredded in a blender. 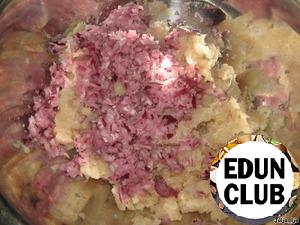 There are crushed and onions. You can just finely chop. The slice of bread cut off the crust and pour the milk. When it swells, add to the stuffing. And add semolina. Sprinkle with salt and pepper - to taste. As to taste, add nutmeg. On the skin, spread the stuffing. For the lack of my Marley, I have used a normal bandage. Bandaged carcass.
If you have gauze, just wrap in cheesecloth carcass and fasten the ends. The most important thing. to gauze well tied the carcass, otherwise everything will collapse. I am the way, the bandage is more like it.. Put water on the fire, as boiling, salt, pepper - to taste. Add carrots. Boil it until soft. 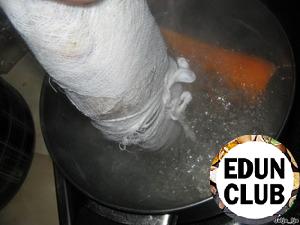 Then add the carcass. Cook for 25 minutes. The broth is cooled (strain),
combine with gelatin (after making him what is written on the package, if you need to heat the heated).
From the trunk remove the bandage and cut it into thin slices.
Carrots cut into rings. In a glass deep dish place the fish, parsley and carrots.
Fill with broth. Put in the fridge (carefully!) and leave it there until fully cured. Shrimp marinated in Thai
153 - 10м 4
Delicious, unusual appetizer: to prepare quickly and easily. Impossible to resist! In General, called "Lossky", but then need a mint, and then a slightly different recipe, so let it be in Thai! Herring sweet
107 - 50м 10
The series is very simple and fast recipes. Honestly examined all the recipes herring. My not found. Try this, and it is sure to become your favorite. The hardest part for me was to give correct proportions, because for as many years as I do the herring, I always do it "the eye". Subsequently, I suggest you to adjust the recipe to your taste: some more sugar, and who of salt, maybe less vinegar. the main thing is the cooking technique. Crab sticks sesame
130 - - -
Quite unfairly pushed shrimp into the far corner. I'm not going to argue about the usefulness of this product, but it is the place to be. But in a sesame coat sticks out at all tasty. Try. Hot appetizer with crab meat
124 - 20м 6
Hot appetizer is a variation on the beloved Julien! A delicious combination of crab meat and leeks in a creamy cheese sauce! Herring with onion in a mayonnaise-mustard dressing
105 - 15м -
About Lovely herring..! You always find..! Long ago you we know..! And reverently respect..! As always, a save..!, and in many ways come to the rescue..! Without you, no snacks..! What's the secret..?? Though the type is quite simple.. only in dishes of gold..! No potatoes.. no vodka.. without the mysterious herring..! In the trail a huge thank you! You're irreplaceable..! Appetizer of herring
136 - 20м 10
This appetizer is very easy to prepare. It can be easily spread on bread, to fill baskets. Herring home-smoked
249 5 - -
Similar recipes are on the site, but I was prepared according to the recipe nnsvz with hood-cook, she did the mackerel, but I lay frozen herring, and I decided to experiment with it. Very tasty!!!
More recipes