Never thought capable of such "feat": cook the meat in beer! My husband 1 time per month walking with his pals in "Irish pub" (from the family tries to escape!). His cronies under him to become: with two he studied at the College before the army, with two working and one with the army remained with him, you see, in the same tank "rode", tank...! And they go in the pub to gossip (bones for its mate wash up!), for the football, yell, yeah RUB shoulders with bikers! And when beer get drunk, they start dancing - that's where the horror! What are the names of their dances, to undertake, but for dancing there is a special shoes with such cleats, if the forehead will - kill! Comes from their "sessions" our daddy tripping on the legs, but himself; he smells of beer, not other people's spirits, well, thank you for this! And cook your meat in beer I spodvig it is saprogenic, him, see, the holiday and the next day I wanted... beer was prepared for the first time, and I know for sure, not the last! It turned delicious! Therefore, don't be strict to me!... How much meat to take – you decide.
I had about 400 grams of chicken fillets, about 300 g fatty pork. And everything else by eye, beer was 1 bottle (German dark). Chicken fillet cut into thin strips, garlic grind. Marinade for meat with spices (onion, garlic, dried vegetables, salt, pepper) and add dark beer (1 bottle).
All mix well and put into the fridge for a day (I have 3 hours). 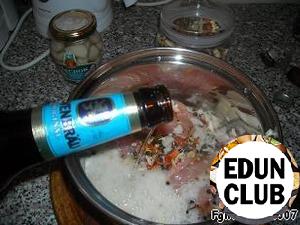 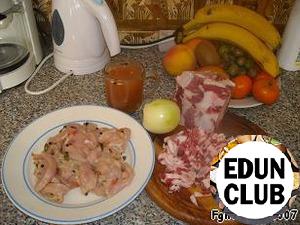 Then squeeze the meat, the marinade is drained and set aside. Fry the bacon (pork) with onions and put it all in a saucepan. Then, the separated fat, fry the marinated chicken pieces. You want to cook to a nice Golden brown. 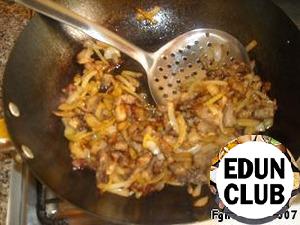 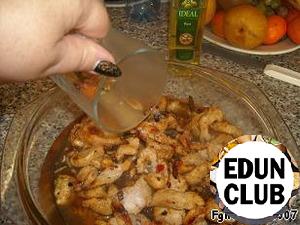 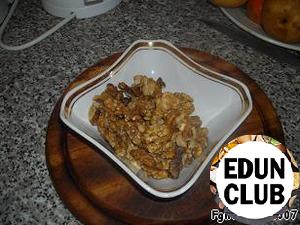 Then everything is mixed, pour the marinade (beer), salt, pepper (not regret!). and sprinkle with crushed walnuts. Cover with a lid and put in the oven for 2-3 hours, the temperature is 150 degrees (I was preparing in aerogrill at a temperature of 235 degrees for 2 hours). And as for me Ireland is associated with herbs, better than kiwi I do not think I could, took the daughter of this fruit! Garnish served boiled rice. Rice is best to take steamed. Cook it after boiling, the water is drained, rice again pour cold water and cook. Do this 2 times, govarival in the third water (then add salt). The rice should crumble. Here is the tank (or nearly so), which "rode" our dad and husband! And below himself "dancer"! He is a big-a big Hello! Delicious hi! Pork with berries
105 - - -
Tender meat with fruity notes. And what a smell! You can cook in winter from the frozen berries. Roast pork with asparagus
84 - 60м -
I hasten to share the recipe, which will make your mouth water! The taste of the meat is unusual, and asparagus are perfect to it as a side dish! Knuckle with vegetables
74 - 180м -
Of shank it is possible to prepare the feast, Yes - gorgeous. Don't believe?! And view a recipe, isn't it glorious?! "All about knuckle"
84 4 150м 3
Cooking shank engaged cooks from many countries. We just try to combine their experience. Beef Stroganoff with pickled mushrooms
103 - - 4
Of course properly prepared wrong. But I've tried to bring a dish that is tried in the small town of Vologda region, Vytegra. Lazy chops
91 5 30м 4
This is a favorite dish of my son, many years ago, a friend gave me this recipe (then the son couldn't use a knife), so I roasted his meat Browns. Do not judge strictly. This is my debut on the cook. Try it - it's very tasty. "Worlington"
78 3 - -
Good day, lovers of delicious to think about, to cook and eat. Today's post is about meat. Simple and delicious. For the rest under the cut.
More recipes