Very tasty cake. Not cloying, with a light taste of honey. 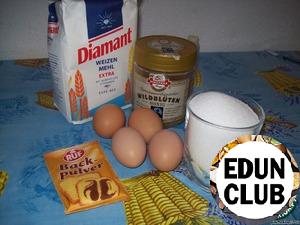 Products to the test. Mix sugar,3-4 eggs (if eggs are not larger then 4, and if large, 3 pieces) honey and baking powder. This kind of mixture is obtained. Put the Cup in a water bath and heated while stirring until then, until tripled. 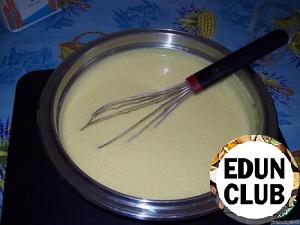 Is the mass after heating shows that it has increased greatly. 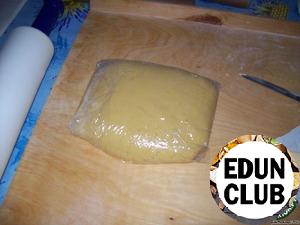 Give mass to cool to approximately 30°and gradually vsypaya flour, knead the dough, it takes about pounds, the dough should be soft, elastic, slightly stick to hands, pleasant is. Wrap the dough in clingfilm and leave to rest. While the dough rests, we prepare the cream. For this mix in a saucepan the sugar (half Cup(I take a little more than a Cup)) flour, starch and egg, mix well ground. Pour milk into a small saucepan and put on fire, bring to a boil. Pour the hot milk in a thin stream into egg-flour-sugar mixture stirring constantly with a whisk. Cook the mixture stirring constantly over medium heat until thick. Until you get this kind of mixture similar to pudding. Set aside covered with a lid (without a cover is formed on the surface not very appetizing crust) sometimes a lot of stir. Let cool to a state of fresh milk. In the cooled mass beat with a mixer soft butter. The cream is well whipped. 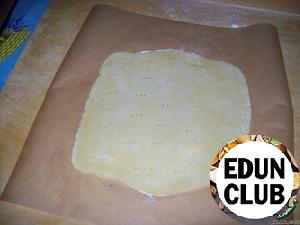 Divide the dough into 8 pieces and roll out, adding to the surface in a thin flour tortillas about the size of a large plate, pinned with a fork, I rolled on a sheet of baking paper, then bake until light Golden brown. Finished cakes cut in the shape of a plate. Spread cake layer on cortico and cream lubricates, it is the following the cake and the cream again and so all the cakes. The top and sides of cake, sprinkle with crumbs, which cook from scraps. It remains only to give the cake soak-the best of the night. And you can enjoy a tasty cake with tea or coffee! Invite everyone to a tea party! Cheesecake with caramel and pecans
375 - 210м 7
Cheesecake with Caramel and Pecans. Do you love cheesecake? For example, I adore. And even with a taste of caramel and crunchy nuts. The texture is very delicate! At my house its dare instantly, so all-all advise him to cook, it's something new and not quite normal. Good luck to everyone! The easiest Apple strudel
397 5 40м 10
Prepared quickly and the ingredients always have on hand. For unexpected guests or just a family tea party. Cottage cheese pie low-calorie
308 - - -
A very simple recipe, suitable for "beginners", and professionals). Especially appreciate the recipe for those who are watching the calorie content of foods or diet. The cheesecake turns out tender and juicy! Lemon carrot cake
383 5 50м 8
Mmm... Just an excellent pie of my childhood! Always when he is eating, going back to childhood! The recipe of my Moms! Viennese pie
363 - 60м 8
It is not only a delicious pie with a crispy crust, but a good way to dispose of the remaining jam or jelly.