Frankly.. I've never cooked small plates of cake, just somehow hands did not reach.. But I "got" and to this category of recipes. At first it seemed to me that something new is there to think hard, but then turning on the imagination, invented and fairly quickly and easily embodied. By the way with the same speed and the table flew and everyone enjoyed it. The competition "new style". Firstly, we will stuffing. For the first, fry onion, sliced into strips, vegetable oil. 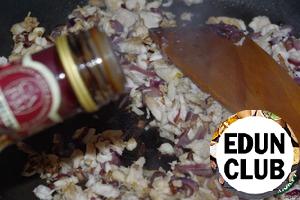 For the second filling, fry the second onion, add chopped mushrooms, salt and pepper to taste, sauté together until tender. 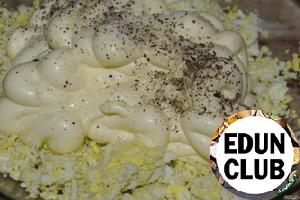 3 cook hard-boiled eggs, RUB on a small grater or grind in a blender (which is better, just my blender is broken ( ( (). Add mayonnaise, salt and pepper - to taste. 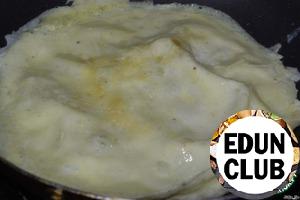 The remaining egg, lightly beat with salt and pepper. Fry thin omelets-pancakes. I got 7 pieces, but one was subsequently unnecessary, focus on the size of the bread, I had a small. The bread is cut lengthwise into two parts, closer to the base. Take out the crumb. Inside the lubricated egg mixture, using it not all, most will need to grease the top. Rolls stacked on the base, alternating the filling. The filling I have left, I put it on rolls. Cover with a top, trying to keep all the stuffing was inside. Give the bread to its original appearance. Grease all sides of the remaining egg mass. Cheese RUB on a grater or chop finely. Put in a plastic bag (preferably in the 2, for reliability). Put on the fire a pot of water, bring to a boil and immerse in boiling water package cheese. Molten. To photograph here it was very hard, had to act quickly. When cheese is melted, it is necessary to lay out on prepared plastic wrap, spread out on the table. Film grease with vegetable oil (no smell). On the tape, roll the cheese with a rolling pin, as far as possible. Allow to cool (because the top layer with mayonnaise, can turn sour). Transfer the cheese layer on the cake as the mastic. The surplus crop. Garnish with green onions, tearing it along with your hands to get curls like streamers. And bell pepper, cut into thin strips. Leave to soak in refrigerator at least 3 hours. Casserole buckwheat "Plan of attack"
88 - 60м 6
A hearty and simple dish, with appropriate design will perfectly complement a festive table. But I have this time "severely"))) goes Well with pickles! And tellingly, the cold seemed tastier than the hot. Hot sandwich cake
63 - - -
Sandwiches are loved by all. And if it is not clear how to treat guests so that just liked or no effort and/or time of invention and the purchase of products, the sandwich is the perfect solution! But so I want to treat guests nicely... well, I propose to apply to the table hot cake sandwich. Always delicious and impressive! And we will prepare a very simple home-made salted cucumbers. Go) Pancake cake
60 - 120м 6
Very hearty and colorful dish. In its original form tried without Korean carrot, but decided that it is still delicious. So in my recipe little carrot and settled. Pancake cake "SUMMER"
89 4 120м 14
There are so many recipes of pancake cakes, so I decided to experiment. View, read, and voice your opinion, please, about my experiment! (sorry, I can't buy:- ( ) Cake snack "Cloud"
105 - 60м 12
Another name for the impossible to think, as this cake turned out well, just air and so delicate.... the basis of bread with butter.. cream cheese with herbs.. the most delicate whipped cream.. paprika and garlic for spice.. mixed green pepper and baby corn for brightness.. dill pickle.. shampinonchiki and krevetki... very easy to prepare... this dish will decorate Your holiday table.. Casserole with liver
62 - 90м -
I don't know why casserole it was in the original. To me it looks more like a pie. But not in the name of the case, and on the palate. Tender, hearty pancake dish. This is also a continuation of my colorings. The recipe was put up by me in 2008 Cake "pancake"
86 5 90м 4
recently did so here is the snack cake of pancakes. Frankly, eaten at once. I made pancakes from processed cheese, I prefer these, they have a pronounced creamy taste.