Ingredients for Caviar of eggplant baked

Step by step instruction of cooking Caviar of eggplant baked

Eggplant bake in the oven whole, put between two plates of a yoke that flowed bitter juice.

When the juice in the pan is evaporated by half, add half the norm of green pepper, minced, and simmer, stirring occasionally, until until nearly all the juice has evaporated and a red oil will not cover the whole mass.

Dried eggplant mince and deep stew pan with the remaining oil until the aubergine until the whole mass thickens to the consistency of thick semolina.

Both masses join, add the remaining finely chopped green pepper, parsley and put in the oven.

Ready and still hot add the eggs beaten with salt, garlic, Bay leaf, knead well and cool under a cover. Store eggs in the refrigerator.

You can also make caviar from carrots, in the same proportion, but the carrots grate on a grater rare raw and stew in a pan with butter until soft.
Winter in the eggs instead of fresh tomatoes put 1 Cup tomato paste, diluted with water in the ratio 1 :3.
In the summer of the same caviar can be made from zucchini, keeping the same proportion of products, however you have to take zucchini to 3 kg, remove skin, cut into cubes, put in a saucepan, add the same amount of oil and simmer, stirring occasionally, until, until you have a fairly thick puree. Pancakes with shrimps
85 - 40м 1
Good snack on the festive table. 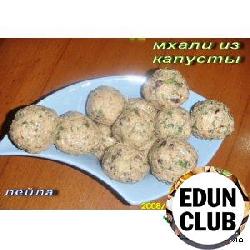 Crackers with meat
93 - 15м 8
Soft and fragrant crackers with a hearty stuffing fried in batter. Corn-beef casserole
160 - - -
I had a jar of corn. Daughter eat corn refused, the husband said to do just a salad, boring. Included the imagination. What happened? Yes, we ate this casserole for 10 minutes... Selecci eateries
138 4 30м 16
This is a quick option, but delicious and cute snacks from ready-made puff pastry. Cheese balls of "Snow"
114 5 20м 5
One day sitting at home, I was bored, got into the fridge and there: cheese, eggs. And in the drawer a bag of flour without the case costs. Opened a "cookbook" grandmothers and found there is a great recipe. Now I want to share with you!!!!!! "Seasoned" the duck breast
121 5 - -
The actual duck Breasts I did the first time. Prior to that made from beef and pork This I mean that you can take any meat and the cooking technique is the same Chicken in a fragrant sauce of mayonnaise
193 - 30м -
This is a dish we love. Even my little son who always chooses the food, eating till the end and still asks for supplements. Prepared quickly and it turns out very tasty.
More recipes