Best for snacks! If you phoned a friend and said that I would come to sit in the evening with a bottle of hot drink, You can feel free to cook this dish (which does not require a lot of work). Rich, cool, delicious broth, meat, vegetables - a perfect dish for a good meal. It is known that under rich and fatty snack you can drink (the mood, of course) a large number of alcoholic drinks - especially if you do not hurry, and if you have a good company. ))) Under this light vodka is the perfect food Supplement. 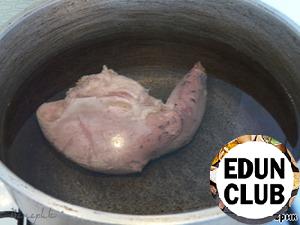 Language pre-cleaned and put in a large kettle, cover with water and bring to boil. To remove the foam.
P. S: How to clean beef tongue:
Fresh, raw language is immersed in boiling water for 3-4 minutes and quickly Scoblete with a knife, removing the skin before it gets cold. If the skin is still left on the tongue, again immersed in boiling water, etc., is not completely clear, and the language will not be white.
By the way, this method is much easier and better to clean (removed a thin layer of skin) than pre-cook it. From boiled language so the skin is not removed, it only remains to cut and everything. After an hour, add the beef, After another hour and a half - chicken legs. After put the legs, to give the broth to boil and put the carrots, cut into 2 pieces, cut into large parts of the leeks and parsley (tied with a thread, then it was easier to get up and throw) Give the vegetables to cook for 25 minutes turn off the gas. Cut the meat into small slices and place on a plate.
To put the leg completely, add the vegetables.
The broth is served as a first dish, sprinkle with herbs and black pepper. Of artal
301 - 180м -
The artal - the so - called Georgian sirloin, shank, and also a meal out of it. In fact, the broth is very concentrated, fragrant, and most importantly, very useful, especially for a growing body! Spicy broth with poached egg and croutons
190 - 30м 4
No, no, no! This is not a Cup of coffee with the desserts.! It nukusskaya, spicy, strong broth with tender poached egg and crunchy croutons! Simple, tasty, juicy... Quickly warms the cold winter evenings and saturates easily in the summer heat. Beef broth with pancake noodles blinnye
104 - 45м 8
Delicious, quick to prepare and without a great cost to the family purse dish. Suitable for your home lunch or for a festive table. Concentrated red broth "demi-glace"
159 - 400м 100
I've been a couple of weeks ago, the movie about steak with pepper sauce laid out - a link to the post at the end of the recipe stuck. And appeared in the movie concentrate of red meat stock. I must say that I have a big family and a small freezer. And in the freezer damn thing does not fit. The soups I regularly in all sorts of different dishes I use, but be prepared-they are long and every time you need broth, then to cook it I can not afford. Therefore, the question of freezing and storage is in full growth. Rather, the question is not freezing, and sufficient space to store frozen. And here's the concentrates for me is salvation. Because the concentrate I don't keep them in the freezer and in the fridge (and it is three times larger in volume), and is the concentrate 10 times less.
More recipes