Many years ago, my children had a rest in Evpatoria. With the mistress, an absolutely amazing woman, we became close friends. Cooked together and of course, exchanging recipes. This recipe I suggested to our hostess. And, for many years, he lives in our family. I cook it only at the cottage. The perfect snack for men vodka and a skewer. Men from her just haul!!! The holiday season is approaching, I hope that someone it will be useful. And Tamara Alexandrovna we are friends still, though long ago to the sea not chosen, but the relationship is supported, in correspondence and sometimes we call each other.

Ingredients for Appetizer of eggplant "Hippo"

Step by step instruction of cooking Appetizer of eggplant "Hippo" 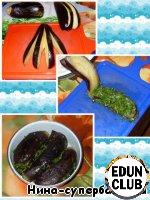 Aubergines cut along on the plate thickness of 0.5 cm, dorezaya to the end to make like a fan.
Throw into the boiling marinade and cook for 15 minutes. Drain the marinade and cool the eggplant.

Finely chop the herbs, garlic peel and squeeze through a press, mix with greens and add a little vegetable oil.
Eggplant sandwich filling, fold, giving the appearance of a whole eggplant and put into a cold place. Infuse half a day (or night).

During the infusion of eggplant juice and secrete it in some fantastic way-gelled. It turns out very tasty.
Before use it is necessary to slice the eggplant across into slices. The flavour is reminiscent of mushrooms! Tomatoes-Palestinian
49 - 20м 3
Roasted tomatoes is a great addition to chicken in sumac, so serve in Palestine. And we try, and why not?! Help yourself. Appetizer "yum"
108 5 30м 15
Dear Powerade, I want to share a recipe off the cuff, who was born today in my kitchen, thanks to my son-in-law, who "ate" jar of condensed milk, not knowing what I was about to make a waffle cake. In fact, the appetizer was cooked "that was"in the fridge. Like all hot and cold. I invite you to try it! The filling can be any - the taste and discretion of the mistress. Pate of eggplant, zucchini and lentils
71 - 80м 6
Offer you tasty, hearty and spicy paste for Breakfast, dinner or as a snack. Serve this pate can be with bread or with crackers, bread or in addition to garnish. Appetizer beans with rice
82 - - -
A great appetizer beans Kidney TM "Mistral" with rice. The beans were quite unusual in taste, and in combination with rice, very tasty. Spring rolls with vegetable curry
87 - 30м 4
You really feel the lack of vitamins. So I decided to upgrade it as much as possible in one dish. So vegetables were not so "boring" and bland I added the spicy condiments. Indian masala, a little curry paste. Dish from "played". Appetizer of zucchini with leek
83 4 25м 4
Nice and tasty snack. Perfect for a vegetarian menu. 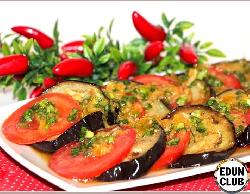 Spicy eggplant for all occasions
68 - 60м 4
Don't know about you, but we have eggplant ranked first among vegetables by taste preferences. And just for dinner on a summer evening, and a festive table in winter. Taste one of the simplest, but the most favorite dishes of our family with this wonderful vegetable. Paneer with tomatoes in a cream sauce
102 3 25м 4
Recipe for Indian dishes paneer-homemade cheese, found in the network. I liked the combination of favorite tomatoes, paneer, and thanks to the sour cream and the spices the dish is so juicy and spicy. Cooked very quickly and easy, but taste wonderful!
More recipes