It happened a long time ago... In the rainy autumn day we came to school and first lesson was supposed to be a nerd. The bell rang for class, and forty-one pair of feet stamped near the biological study, but Anna Pavlovna did not hurry to class, and came to the teacher with the hearing of the sickness of the teacher, and were as "bad" weather we were left in a biological study to prepare for the next lesson. What began... our boys are just crazy for joy that there will be no lesson, and began to solutionate whatever they could. But the fireworks did not last long, as the portfolio fell on the stand with flowers and pots crashed to the floor, to the misfortune of the boys, all the pots broke. The class we were friends and we had a meeting with one question on the agenda was how to save the boys from punishment! The decision came instantly! Let us cap on ranks, which are all folded the money received from parents for lunch. The culprit was sent to the store for pots, but this time the girls removed all traces of "crime". By the end of the lesson the flowers stood still, the office was sparkling clean and we happy went to the next lesson. When Alexandra Pavlovna went to work, we immediately noticed the discrepancy, but it turned out that our pots were much prettier broken, and she began to curse. Only one thing was bad that we left without lunch, so this was our punishment! This snack will definitely make for reunion to remember this case. For the contest "Evening school friends"

Ingredients for Snack "Flowers for classmates"

Step by step instruction of cooking Snack "Flowers for classmates" This is a very simple appetizer, but very impressive and delicious! Cheese with tomato, cucumber, a bit of balychok, mmmm....For a buffet! Begin! Take a tomato and make four longitudinal cuts to the stalk. Cut the cheese into thin slices the size of the "petals" and rounds the edges. The incisions and tomato paste the cheese. 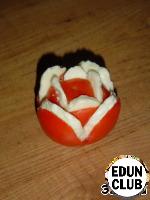 Make four cuts in the center between the big tomato "petals," and insert in cuts the cheese.

Salmon cut into thin slices and then the slices cut into strips. This is our future stamens. In the center of the tomatoes and pierce with a knife edge holes into which are inserted the "stamens" of sturgeon. Stamens inserted between the "pestle" of a thin slice of cucumber. Cucumber cut out the leaves (how to make them, I told you earlier), "Flowers" placed in the center of the plate, sprinkle them with salt and lemon pepper, lay around the cucumber leaves, and between them "buds", made from the skins of the tomatoes. Muffins of Filo pastry with vegetables
69 - 40м 12
Good day!! The recipe comes with the packaging test. To cook quickly, it turns out beautiful and Delicious. Vegetables you can take any on your taste. Muffins can be submitted and festive table, February 23, for men add sausage or bacon as a snack. Of fillo dough thin, lots of vegetables, flavorful and delicious. Zucchini in Kiev
85 - 30м 4
Quite popular, simple in design, but rich and delicious starter of zucchini, quickly prepared and very quickly eaten, try it! Zucchini fritters with quinoa
78 - - 2
Tender pancakes with crispy lean with no addition of sour cream and fish. Help yourself. Hot eggplant rolls stuffed with cheese
73 - 30м -
Hot eggplant rolls stuffed with cheese and tomatoes "Greek pleasure". On one of the Islands of Greece, recently, in a restaurant, tried here are the rolls! Very close to the original to reproduce the recipe could not, there, apparently, are subtleties, but was very-very much! Eat with sauce "Tzatziki" is a sauce based on yoghurt, grated cucumber, salt, pepper and olive oil. Very tasty! Eggplant salad with pepper and garlic
76 - 20м -
Want to offer quick, delicious, juicy, crispy, spicy salad-appetizer of eggplant with pepper. The tanginess of the salad, adjust themselves, adding more chili or garlic. The ready dish is served as an appetizer or vegetable side dish to a main course of meat. The idea saw in the Internet, many thanks to the author Very tasty pancakes
73 5 30м 30
I always thought that the pancakes put the flour, and did so, but when I tried with semolina - this is something. The pancakes keep their shape and very tasty.
More recipes