Brown bread with raisins and honey Great bread from whole wheat flour with raisins and honey. Recipe from the wonderful book the Richard Bertin "Your bread."

Ingredients for Brown bread with raisins and honey

Pagpalit work surface with flour. Divide the dough into 2 equal pieces and shape each loaf. Namely, the base of the palm to flatten the ball of dough into a circle. Fold over first the top and then the bottom third of the dough to the center and how to squeeze. Fold in half lengthways and seal the edges.

Put a clean towel, sprinkle with wholemeal flour. To do in the center of the towels fold and put the loaves smooth side down on both sides of the folds. Cover with the second towel and leave for 1 - 1 1/4 hours or until the loaves will not double.

Preheat the oven to 250 degrees. Turn the loaves on a baking sheet (which was heated along with the oven). With a sharp knife or razor blade to make one long incision with a depth of about 5 mm along each loaf. Spray the heated walls of the oven with water from a spray bottle. Lowering the temperature to 220 degrees. Bake for 30 minutes - they should get a good Browning. If you knock on the bottom crust of the loaf, the sound should be hollow, "empty". Removing it from the oven, cool on wire rack.

Mix both kinds of flour and with your fingers RUB in the yeast mixture till the formation of fine crumbs.

Add salt, water and honey. Holding the bowl with one hand, mix the other ingredients (or rounded side of the scraper) for 2-3 minutes, until the dough begins to gather in apt. Then dump the dough on the work surface and work with it, trying as much as possible to enrich the dough with air. Pick up the dough from both sides, using the hands, as two forks and holding the top with your thumbs. Lift the dough up and expanding in scope (but gently) down on the work surface (at first it will be so sticky that it will not be easy to detach from the table). Pull the near-side test on themselves and fold forward, arching the arch - so to capture more air inside. At the same time continue to stretch the dough and along the sides, potica region. Repeat this sequence of movements. In the process, the dough will become less sticky, more elastic and will come to life in your hands. Continue to knead until it starts to completely come off from the surface, to look silky and feels smooth, firm, but gentle and pliable. This technique is kneading the dough suitable for any kind of test.

At the end of kneading add the raisins and continue to work with the dough until the raisins are not evenly distributed.

Shape into a ball. Slightly pagpalit work surface with flour, put on it the dough and shape into a ball, one at a time turning the edge to the center. Flip it, draw and tuck the edges. To put it in a lightly floured bowl, cover with a towel and leave for 45 minutes to rest. Next, put the bowl on the work surface and roll it again. Return the bowl to the bowl, cover and leave to rise for another 45 minutes. Lenten buns in the sprinkles.
78 - - -
These rolls are solid pros-two types of whole grain flour (rye and wheat), no sugar and salt. In addition, they are very elegant!!! Cheese bread without yeast
46 - - -
Hello! Today I offer to cook unusual and delicious homemade cheese bread. And cooking is my favorite part! Bread made easy! Milk bread
102 - 240м -
We all love soft bread! A freshly baked, crispy, with a white delicate crumb - mmm! Pleasure! Many recipes delicious bread "passed" by me! But I kept on, and now I will try to cook them! This recipe is from "cookbook" my new bread maker! You can also try this delicious bread! Butter braid on wheat sourdough
79 - - 10
Air fragrant puff-scythe will not leave indifferent after tasting it. The result is, without a doubt, worth the effort. I hope You'll love her as much as I love my home and everyone who tried)) 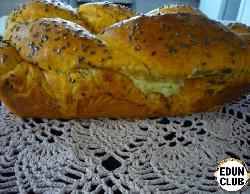 Tomato bread "Martonchik" with cheese, garlic and dried herbs
89 - - -
Once again I wanted to experiment with some bread. The aroma in the kitchen, the girls stood indescribable. Even me neighbor came running to ask what it is I'm baking. The bread turned out Sooooo tasty, fragrant, unusual. Judge for yourself... Bread with cornmeal
93 - - -
Suggest to bake with the addition of corn flour and rolled oats. Bread poluchaetsya tender and very tasty. Bread with flax seed and sunflower
124 4 - -
For lovers of bread with beans. Particularly lovers of sunflower seeds dedicated ))) This is one of my favorite recipes because bread contains lots of seeds. Homemade bread
84 - 90м 1
This is my first recipe, do not judge Rick... Long thought - to spread or not to spread pushed the girl's comment in the recipe cutlets, which have complained that they do not have in selling bread-brick. My bread form is not brick, however, to taste it)))and is notable for the fact that You do not stain with flour table, respectively, it is very convenient for those who live in the Dorm or, like me, in the same house with numerous relatives, and the kitchen freely very rare, well, for those who loves cleanliness. I batch make the room into a saucepan. This recipe on the website is not seen, but if there is I apologize in advance.
More recipes