There was the girl whose mother always dressed in all red. And she went always in a red skirt and a red blouse, red socks and red shoes and even red riding hood. And therefore called it "Red riding hood". Then one day the mother says to her: - little Red riding Hood, here, I give you a jar of jam, garlic bread... the Dough is very easy, requires neither material nor physical effort.

Ingredients for Dumplings with garlic "from little red riding hood"

In warm sugar water to sprinkle the yeast, stir and leave for 15 minutes to raise dough. At this time, sift flour. When the dough has risen (in the form of a cap of bubbles or foam), gradually pour the flour, add sunflower oil, garlic mashed and knead the dough. The dough should be knead until you leave air bubbles. The dough can be work in 5-7 minutes as it is mixed.

Dough formed into dumplings the size of a walnut and fry in vegetable oil until Golden color.
Despite this simplicity, it turns out very tasty, richly, softly. 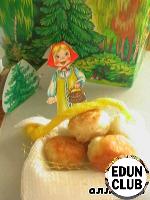 Promised little Red riding Hood that will perform everything exactly as mother said, and left the house. It goes along the path and think: "Go-ka in the woods just a moment, Narva flowers for grandma".

But only she walked into the thicket like to meet her, bad wolf. "Where are you, girl?" - he asks. And little Red riding Hood, not suspecting anything wrong, he replied, "To grandmother, she is ill and weak, I told her Goodies are".

The wolf ran to the grandmother and swallowed her. And when he came to the house of little Red riding Hood, the wicked wolf ate her, too. And know, what would it ended, but luckily was held at that time by the house of the brave hunter. He cut open the wolf and out came little Red riding Hood, alive and unharmed, but for her grandmother. And if they have not died, simply my mom, the cunning wolves, brave hunters, curious girls live in happiness and contentment until our days... 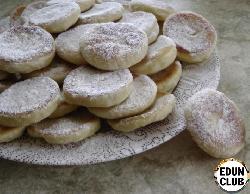 Kenyan delicacy "Mandazi"
94 - - -
Interesting and easy to prepare, moderately sweet, cardamom lends its flavor and finish. Nothing fancy, but it has taken its place in our kitchen. Curd donuts from my childhood
125 - 25м 45
I remember as a child my grandmother often prepared it, so good. So decided to cook for my little daughter and husband. Ate for two days! Got somewhere 45 PCs. Air donuts
80 3 20м -
When we were kids, mom made these donuts often, but balls and I called them the "kolbochkam and". Very tasty, just melt in your mouth. Here, I remembered and decided to change a little, but "Korobochka " not forgotten. Donuts-rings with ricotta
112 - - 22
In the kitchen, talked to Jr. a son about my childhood. I told him about what tasty was cooking, my mother, his grandmother. I remembered that mom fried round doughnuts in lard. Much like me then doughnuts, but I couldn't stand on the spirit smell and taste of bacon... the Son grimaced and was asked to make delicious donuts - rings, which they gave the school... school a Recipe of donuts I don't know, but the shape turned out the same. Pumpkin donuts
67 - 40м -
A delicious treat to tea "autumn notes," which will not take much of your time and effort... Tykvochki
133 5 - -
Again, honey Bunny!!! Ready?))) Gorgeous donuts from the pumpkin. Copalis instantly))) Delicious and bright!!! Recipe from the website "Arkaim," the author does not remember - but!! big thanks to him!! 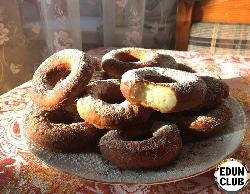 Donuts "Moscow"
39 - 60м -
These donuts appeal to fans of not-so-sweet pastries. If desired, these donuts can be eaten with condensed milk or jam! Most of all, they like children. This recipe was taken from the book, which I got from my grandmother. "the Book about tasty and healthy food" in 1953!
More recipes