Snack Martini "Under the hood" 10 years ago I started Dating a young man who later became my husband and the most reliable and faithful friend and protector. Then I had no idea what to eat wine or a Martini can not only mayonnaise salad, or a juicy piece of "meat by-francuzski". In one of the romantic evening, the husband decided to treat me that made it all himself. Poured into a Martini or two, threw a handful of ice. And prepared sandwiches: a slice of cheese, a cube of pineapple and a slice of chocolate. My gastronomic ideas about the combination of cheese and chocolate were such that, when the husband said, "Try it. Need it all together to eat". I obeyed of course. Put it in his mouth conapesca, chewed, tears rolled down the face.. and suddenly at some point my inner I stopped fighting him and said, "Dasha, it's very tasty!" Since then I have under the hood of the snacks and appetizer was under the hood of the glass..

for 8th of March

Ingredients for Snack Martini "Under the hood"

Step by step instruction of cooking Snack Martini "Under the hood" All that we need for fruit and chocolate layer.

Chocolate should break into slices, add milk, put in a water bath,

Well from all sides, lubricated with chocolate.

Pineapples in chocolate strung on wooden skewers and leave for a while. 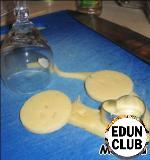 Cheese cut out circles (with a diameter the same as the slices of pineapple) and hearts (you can just circles, flowers - whatever).

Kiwi cut out hearts and dip in chocolate like pineapples. Appetizer with vodka
67 - 10м -
This specific recipe snacks given to me by my grandmother, however, like it is not all. Earlier in the villages did not have such a variety of products, used that is. I use this recipe when unexpected guests come over, very quick and easy. Canapés with red caviar on homemade cheese crackers
90 - - -
Another original version of supply of red caviar. Well, plus the recipe for homemade Graham crackers without any chemical nasties! Help yourself! Eateries chicken cakes with sweet cream
86 - 40м 6
Delicate cottage cheese and carrot brownies, stuffed with chicken, cheese and broccoli, covered with a delicate cream of curd cheese with sour cream! Bright, beautiful and sooo delicious! The bonus turned out eateries balls in sesame breading! These snacks will look great on the holiday table! Zakuani "brain"
216 3 15м 2
When a friend Elina told me the recipe for this simple zakubanie, I said that there is not going:) She was reassured that her reaction was the same, but this starter was most popular for teeming with all sorts of delights of the table:) I took a chance and you all highly recommend! At least try it, because it's really tasty and interesting:) Schwein Klein
194 5 10м 3
Usually, I make for Breakfast this dish only in the country, but at home you can cook. All the versatility in the speed of preparation Canapés of herring "easy"
77 5 10м -
This snack is known to many, but on the website I didn't find her. Can someone come in handy... is Prepared simply, quickly, without hassle. For those who love to crunch and, of course, for fans of herring.
More recipes