Actually, it's more, Banquet dish, but I think if you submit it in the evening, with candles, and even under wine... 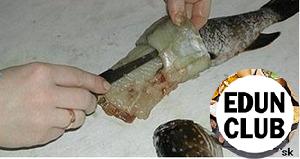 Fresh pike to clean without damaging the skin. Cut the gills. Cut off the head.
With a sharp knife to cut the skin around the circumference (from the side of the head). Released the skin to turn toward the tail.
For the greater safety of skin pruning is better done so that the skin remained small (1~2mm) layer of meat.
The fins are cut is not necessary. So, gradually cutting and twisting the skin to reach the tail.
The bone from tail to cut to the caudal fin was left with the skin.
Boiled the carcass to remove the entrails. Cut the ridge.
The slice of bread to soak in milk.
Meat with onions and bread skip three times through a meat grinder. Add the softened butter, the egg and beat in the lush mass.
Season with salt and pepper.
The skin fill with stuffing. Fill not very tight, otherwise when cooked, the skin will burst. 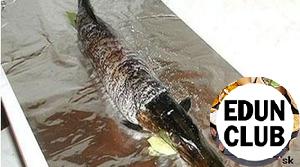 On the foil, folded in half, to lay out a line of Laurel leaves and they put the stuffed skin. Put the head to the torso.
On top of the pike a little salt and sprinkle with lemon juice.
Side of the connecting foil and wrap the edges three times, leaving a small hole for steam output. Into this hole pour ~0.5 cups of water.
Pike in the foil and put on a baking sheet and place in oven for 1.5~2 hours at t=180°C. 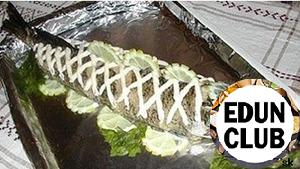 Pike is ready remove from the oven and let cool without removing foil.
To serve cold, put on a large platter and garnish with lemon wedges.
Stuffed pike apply sauce with horseradish.

(Tip - the stuffed pike often boiled in water or steamed, but if there is no pan the right size, you can bake the pike in the foil.) Baked fish with shrimp "my Love"
121 - - -
Love is something without which it is impossible to imagine the life of a single person... we are happy when it is mutual... she inspires and gives strength to move mountains ... to fill the desert with water.. to get a star from the heavens... if it is unilateral, then we suffer... but love can be only between a man and a woman.. the fruit of this love brings a mother's love... the love of children to parents.. the world is love... and love is the most beautiful what is on the ground.. and a romantic dinner should not only be February 14... it is gentle delicacy of fish and shrimp.. candles.. music and good conversation can make any evening a delightful tale of love and be loved! For the contest: "give me tonight" Baked fish with mushrooms and cheese
64 - 90м 6
It is unreal tasty fish, this dish has no name and does not belong to any particular cuisine, but it is truly magical and wonderful. Try this Royal dish at least once, and it's the first piece will win Your heart and will forever become Your favorite dish! Fried mullet in a spicy batter
87 - - 2
Juicy and tender fish in a crispy batter for lunch or dinner. This fish will satisfy not only adults but also children, only then will need to reduce the amount of pepper. Help yourselves, friends! Fish and chips in skim milk
57 - 60м 3
I'm more and more in the menu, use the fish.... Pork we no longer eat, so once a year the barbecue, if only... the Beef is only suitable for first courses.... But the bird we have in the course - stew, fry, bake. Well, here came the turn and the fish learning to cook tasty! Pangasius fries with creamy delicate rice
72 - - 2
The ultimate, deep fried fish is not the most healthy dish but it is delicious! Crispy and juicy pieces of fish, coupled with a creamy delicate rice and tomato sauce - the dinner will have the family taste - well, sometimes I want something forbidden))) Recipe fish fries from Lithuanian cuisine. Try? "Fox joy"
136 - 40м -
Based on the fairy tale "the Fox-sister and gray wolf" In a village lived a grandfather and a woman. Decided to grandfather the New year to make the woman a gift. Went to the river and caught a whole load of fish. The catch turned noble. The Fox saw the old man coming home with a cart of fish, ran out into the road and pretended to be dead. Rides grandfather sees a Fox lying on the road dead. Thought that the collar on the coat. Stopped, lifted the Fox and put her in the sled. And drove on. And the Fox chose the second, Yes all the fish was thrown from the cart. "Here's a New year and a meeting," thought pleased the Fox...
More recipes