Each hostess your recipe soups, and I've seen a few, but all are slightly different. I offer you your option - perhaps someone will take note.

Ingredients for My hodgepodge

Step by step instruction of cooking My hodgepodge Boil the broth (1.5 hours) of meat. I take a bone, where a lot of meat - half soup, half - in other dishes leave (pasta, pancakes, or meat pies). Then strain the broth, meat separated from the bones and finely chop. 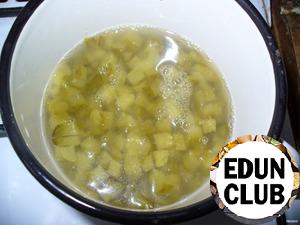 Put them in a small sauce pan and simmer in small amount of broth while preparing the rest for soups. 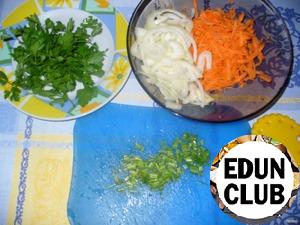 Carrots grate on a coarse grater, onion cut into half rings. The greens cut the stems and slice them. Leaves of green is left. All this fry in vegetable oil. Season with salt and pepper, add the tomato paste and a little put out. Cold cuts and fry them in butter in another pan until slightly Golden. Broth put on the fire, when it boils, lower the diced potatoes. When the potatoes are almost cooked (need to try), omit the cucumbers, along with the broth in which they were boiled, after all both pans and sliced the meat from the broth. Boil, if necessary, it needs more salt and pepper to taste. Left the leaves green chop it and sprinkle soup on top. 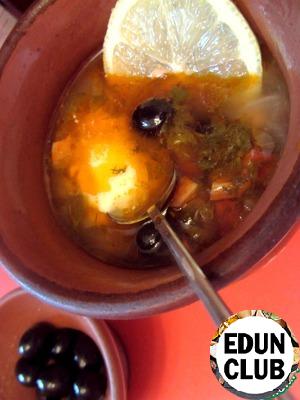 This step is optional. Pour soup in pot and then in the oven (until boiling). Before serving in each pot (or dish) to put the sour cream, some black olives and a slice of lemon. By the way, my husband eats some reason, no sour cream...

"My bag"
77 4.5 40м 6
Homemade hodgepodge. My family and friends really like how I prepare it. It all started with the fact that my grandmother cook, and she taught me how to cook my first soup - a-bag!!! It turns out very tasty!!! Meat Solyanka
72 3 210м -
I want to share my recipe soups team meat, almost a classic, but with the addition. Maybe someone will be useful. Hodgepodge "Mushroom Paradise"
115 - 60м 5
Mushroom dishes like nothing out during lent. Rich in taste, easy to make and beautiful when applying. And this is important, I'll tell You. In the bag will meet dried mushrooms, frozen and pickled, arch I all this beauty powder from dried porcini mushrooms. Help yourself. 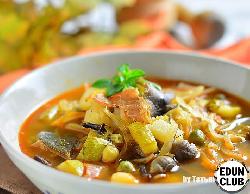 Eintopf autumn with mushrooms and bacon
42 - - 2
Our family really love the thick, rich soups, especially with the beginning of the cold season. There are already German eintopf of sauerkraut, but I will offer you my recipe of this thick soup. With forest mushrooms, bacon, zucchini and peas! Almost Solyanka
95 - 40м 3
The soup is cooked almost the same as the bag. Only now in the days of the Post sausage and the like to put, I will not. In the soup I put red rice. Soup with Brussels sprouts and vegetables, with olives, lemon and spicy cucumber. This is a very rich, tasty and healthy soup. Good for those who follow the figure. The sea of benefits and taste! Salsola fish in the pot
92 - 240м 6
Delicious fish soup. The recipe is very simple, both technologically and in the variety of products. The only thing – a little "long"... On the website, of course, many recipes Thistle, but maybe this option is useful to someone... Solyanochka a La "Bavarian"
63 - 90м 7
Slightly modified recipe from a German restaurant. I will not name, so as not to reveal the secret of this institution. The difference is that instead of pork meat and bacon I used smoked knuckle.
More recipes