The soup of red fish This soup is my kids all prefer the first dishes. With natural dressing (I never cease to thank Mrs. Kasia for this idea), prepared from vegetables grown in the country, this soup is very useful for our kids! Stage of the competition: "Nutritious lunch".

Ingredients for The soup of red fish

Step by step instruction of cooking The soup of red fish

Honestly, this delicious soup we eat as a family, so I cook it in 5-liter pot. The ingredients of this calculation. So. Pour into 5-quart saucepan 3.5 liters of water, bring to a boil, put the fish, bring again to a boil, remove the scum, add salt and cook on slow heat for 40 minutes. Remove the fish and allow it to cool (to remove pits).

At once, the very first launched into the broth. Let it cook a little longer, as I have winter cabbage varieties.

Peel and cut into small cubes the potatoes. Also launched into the broth followed by the cabbage. And leave to cook on slow fire for 20 minutes.

I could not resist and added a bit of chopped parsley, despite the fact that it is in the dressing. Put the parsley in the soup my mother taught me, she gives the soup and the soup a special taste.

Of fish carefully remove the bones (the trout is very small), we divide it into small pieces and put in soup. Add the Bay leaf and cook on low heat for another 40 minutes. Soup needs a good protomoteca, potatoes should be soft after boiling and the cabbage to become soft. 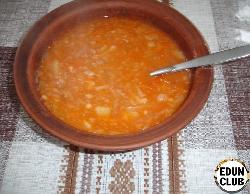 Borscht a beet kvass
161 - 90м 6
I bought at the market beets, but it is not as Burgundy as it should be, with white stripes-streaks. Upset, thought to throw away, but in time remembered that a beet grandma calls "print" and cook the soup with her. The other does not recognize. I - theses is a traditional dark Burgundy soup (as pictured in "the Book about tasty and healthy food"). Well, what can I do? And then swept me back: a winter vacation, I'm at my grandmother's house, ride a roller coaster-steep slopes on sleds to the state "caspary fingers came" eating grandma's soup, looking out the window at the neighbor's yard, the snow kuchugury, and so I love it... Yes, there is to remember! Help yourself! 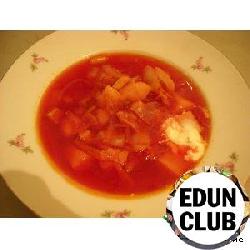 Soup Flotskiy
72 4 - -
Well, I love borscht, and constantly experimenting. This is certainly not an original "Bunker" soup, but tasty!!!!!!! 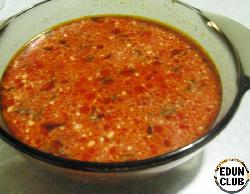 Soup classic
72 - - -
The basis for borsch is beetroot. In recipes there are two ways of cooking: stewing chopped beets with tomato paste, vinegar, and broth and boiling a purified beet in water. The latter method is easier, the color beet is brighter, the taste sweeter and the density is softer. In addition, the soup can be cooked in any broth or even water (lean), in this dish the broth just adds to its charm. In the proposed recipe, prepare the soup according to the second embodiment. 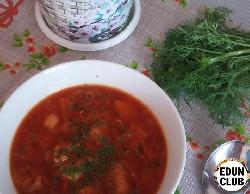 Delicious soup with chicken
142 - 30м -
Offer You a recipe of delicious and flavorful soup, and besides, easy and quick to prepare)) 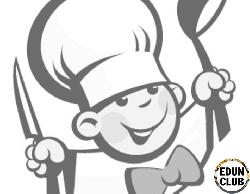 Soup "Siberian"
69 - 40м -
This Siberian borsch, delicious, and most importantly, very healthy; try my idea of making this soup!!! 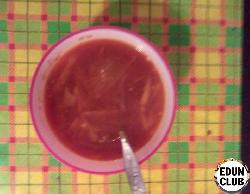 Soup with radish and unloading
76 - 30м 14
So, the option of soup for those who love soup, but alas, a variant of broth, with potatoes and zazharkoy not suitable! Exactly! No potatoes, broth, a roast! Healthy eating, in one word! Do not include the skepticism! Try it! Because instead of potatoes, we will use the daikon radish, or Lobo, as it is called in the far East! The result - a very useful borschets, with minimal calories, a great spicy taste! 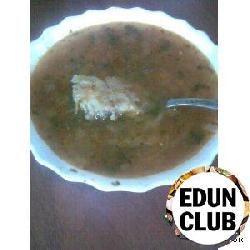 Soup "Atlantic"
72 4 40м -
Tired of the usual soup? Try instead of meat to put the fish from such changes, the soup will not become worse!
More recipes