Crumbly shortbread cupcake, baked with a delicate protein topping. The recipe came in one of the many family culinary notebooks. He was titled as "Cupcake, try it." Obviously, someone just recorded it hoping to cook later and gave myself the installation is the verb "try". I'm in a hurry I read the word as "try" (you never know what specialties and, consequently, language come this dish). His mistake realized after a couple of days, but the cupcakes are now referred to as nothing other than "try".

So, to make our try, prepare unsightly ingredients.

Separate the whites from the yolks.

Of flour, 80 g sugar, yolks and butter and knead the dough.

Leave for an hour in a cool place (I left for 20 minutes). 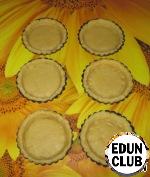 Roll the dough and put into a form. In one large, I prefer small sized. 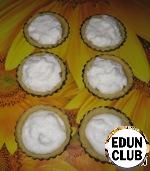 Spread beaten egg whites over the dough. And send in the oven until Browning.

On a small fire baked for 30 minutes.

So look inside. You can even finely chop the Apple and add in virtue proteins and have the mass put on the dough - will add humidity. Vegetable muffins with prunes or raisins
141 - 40м 16
Dear cooks, I offer you another recipe lean treats. Cupcakes with a light crispy crust and tender inside. The subtle honey aroma with a spicy tinge. Mmm, Cook them simply and easily. Try it! Instantly disappearing muffins
157 - 30м 17
With a quick and delicious recipe for muffins. And if instead of chocolate, use food coloring, you get a wonderful rainbow muffins - checked. Lemon cupcakes with mint
149 - 90м -
Very tasty cupcakes! Delicate, crumbly pastry with a citrus aroma and the freshness of mint. Not difficult to prepare. Perfectly diversify the Easter holiday table! Help yourself.. Cupcake "cherry in chocolate"
183 - 60м -
I offer you a tasty cupcake. It combines cream and chocolate layers, and cherry. The structure of the cupcake slightly vlazhnovatoy. The cupcake itself is moderately sweet and very tender. Cupcake "Economical"
486 - - -
For those who love to pamper family cakes. This recipe, from virtually nothing, You can make a fancy treat for your favorite Spicy cake with drunken raisins
128 - 60м 6
Why the drunken raisins? I have "drunk" coffee liqueur for two days. Winter cupcake with spices: ginger, cardamom, cinnamon, nutmeg. Fragrant, new year, simple and fast execution, thanks to a food processor. Of course the dough can be done manually. Mini cupcakes a La "Battenberg"
153 - - -
A traditional dessert of British cuisine -the Battenberg cake is baked in two layers of pink and yellow that sandwich apricot jam and harvested in a staggered manner. In the classic version of the cake is covered with marzipan frosting. Based on the recipe, tested by time, I made mini-cupcakes covered with icing made from white chocolate. I invite everyone to enjoy a cupcake and a Cup of tea to listen to the legend...
More recipes