Well, I went to the 5th level. Naturally, it must somehow be noted. Because I don't have a sweet tooth, invite all my probably the most favorite dish - kebabs! They say that girls for cooking barbecue can not be allowed close and that the barbecue is a purely male prerogative. Well, that will break stereotypes. Long ago, in 1991 when the Union collapsed, our family lived in Dnepropetrovsk, and so we were in the territory "wlno Ukraine", and my mother's relatives in Russia. When my dad was discharged from military school in 1993, I decided to take Russian citizenship and to apply for a Russian pension, as it was above. And so he began to wander between the two countries, a month there, a month here. Well, as the men remained (me, mom and sister), some men's duties I took over. Of course, to fix the tap I haven't tried, but to hammer in a nail to twist the wiring if there is no contact, to break through the shell powder "Mole" or something to solder – it, please. I took over the charge of making wine, well and kebabs, of course, also daddy taught to do. By the way, my husband never kebabs and prepared. So, in my family is solely my responsibility. Help yourself!

Ingredients for Skewers-assorted "Breaking the stereotypes"

I have long thought what to choose marinade and decided to marinate the meat in two marinades. For kebab, I prefer the tenderloin. The neck is also good, but it is more oily, and about the figure, too, because it is necessary to think. My husband and I went on a picnic together, so I took 1 kg of meat (about 3-4 slices of tenderloin). Usually, when we go to barbecues, I try to count 0.5 kg per person. It may at first glance seem a bit much, but really – at the time. Moreover, meat has a tendency to mariwasa.

The meat is cut into pieces, pepper and salt. Salt but without fanaticism, because the salt helps release the juice, and the meat can get dry. Better it needs more salt just before frying on the coals. But always get it back online not to add salt is not worth it, because then the pieces are neprokleennye inside.

One onion, three on a coarse grater or puree them in a blender.

Add to the meat. Stir.

Two specific ingredient that I personally love: ginger and rosemary. But it is not for everybody. Rosemary, if fresh, chop finely with a knife. If the rosemary is dry, you can grind in a mortar.

Ginger is clean, press the knife and then finely chop it. All this added to the meat.

6-7 onions clean and cut into rings 0.5-0.7 mm. I love when the onion on the skewers is a bit crispy, so I cut it relatively thick.

Now I divided the meat in half to put in two containers for different marinades. At the bottom of the form, I put the onion and Bay leaf.

On top of the meat in a single layer and Bay leaf. And onions again. Because meat from me a little, it was one layer, and all you need to cook meat layers, shifting onion and Bay leaf until it is over.

And the second was diluted by 50% red semi-sweet wine. Usually in cooking, use dry wine, but I like to marinate pork in sweet or semi-dry. For pork, this light sweetness is very topic. By the way, if You want to marinate the meat, then dilute the wine silnogazirovannoy mineral water. Gas in the water will allow the meat to zamarinuetsya much faster. Meat is best put under the press. But I had a small container that I filled with meat and onions tightly enough, so the pressure served as the covers of these containers.

The meat I sent in the fridge and began to prepare marinated onion to the skewers. Onion cut into half or chetvertfinalny. This, as someone like that.

On the bottom of the tank, pour a little Apple cider vinegar (balsamic or regular, at the very least), put a few peas black pepper and Bay leaf, potseluem.

It all pour boiling water (about a Cup) and drop into the solution onion for 15-20 minutes. Me to "press" had to put on top of the coffee Cup to the bow was completely submerged in the solution. After 15-20 minutes with onion drain off the liquid, "clean" the Bay leaf and pepper and put in fridge to cool. Be sure to try. Bow loses the bitterness becomes slightly sweet and gets the aroma of Bay leaf and pepper.

And don't forget this here sauce for the skewers to cook: https://www.povarenok.ru/recipes/show/59296/
Well, everything is ready, bags are Packed, going to the nature!

Pieces of different marinades very nice on the skewers.

Ukrainian pork, cooked on the banks of Samara (a tributary of the Dnieper in the Dnepropetrovsk region)... 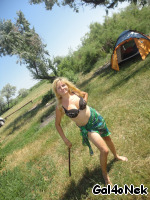 granddaughter of the don Cossacks and Jews, the Kuban Cossacks (Kubanskie kazaki by the way – the former Zaporozhye) and Russian... 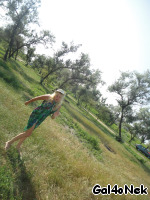 And after the barbecue is advised to throw a little 80s disco to shake the extra calories!

Rest with pleasure, and breaking the stereotypes!