Salad Obazda beer and a football Is over the latest football passion European Championship, and the streets became suddenly unusually quiet. How loud can "rooting for their" all football fans! And, although the title, once again got the Spanish national team, with what I congratulate them, we did "sick" a little, but in German. Well, what's football without beer? And snacks should be wholesome, and cool, for hot summer evenings. Want to learn an interesting salad "beer and football," come visit...

Ingredients for Salad Obazda beer and a football

Once I showed the traditional "Bavarian beer "Obazda": http://www.povarenok .ru/recipes/show/550 39/.
And today we will prepare a cold salad of the same name.

Horns boil until tender and let them cool.
With Camembert with a sharp knife to remove crust and cut into cubes.

While boiling pasta, prepare the sauce:
In a saucepan pour the cream, add the sweet paprika powder, caraway and beer. Bring to boil.

Add the diced Camembert and, periodically stirring the sauce, allow to melt cheese. Add wine vinegar and give a little to writing a rolling boil. Season with salt and pepper.

Strain the sauce through a fine sieve directly into the prepared cones, squeezing through the sieve, the cheese mass. 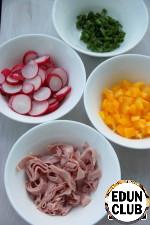 Pickled cucumbers cut into small cubes, and cherry tomatoes - halves.
Add vegetables and ham to the salad with the cheese sauce and stir.

Put the salad to soak and steep in the refrigerator for at least 1 hour. If you need to refuel.

Twilight (hence these photos), the heat subsides, turn on the TV, open a cold beer and get our salad with Bavarian motives!

As informs us all-knowing Wikipedia: "cherry Tomato was bred by Israeli scientists, in 1973. The purpose was to slow the rapid aging of ordinary tomatoes in a hot climate. They identified a genetic combination that helps to slow down ripening, and method of using the obtained gene to the breeding of tomatoes". Salad "Natalie"
107 4 - -
The combination of meat, cheese, vegetables is always delicious, and my zapravochniy.... Try it!!!

Salad bread
122 5 30м 3
Our house is always black bread, garlic, eggs in the refrigerator probably all are... Great salad! After reading this recipe, you may treat him quite leniently, but still prepare. The result will exceed all expectations. Maybe someone once something similar has already been posted on the website, but I like it and want to tell everyone about it. Salad "Health"
122 - 15м 1
Hello! Today I want to share with you the recipe is simple but delicious and healthy salad. Once my mother worked in the dining room, the menu they had was a salad called "Health", so I decided not to invent anything. Let's start :) Salad "Fox happiness"
168 - - -
Did the husband on the birthday salad. The husband has a passion for foxes. That salad meets both turned out. Salad invented by accident, it came out very tasty. Salad "Light green"
138 - 10м 2
This is one of my salads from the "Color on the plate"... several of them, meet the most simple but tasty, easy, useful and enjoyable!
More recipes