All recipes » Desserts » Other desserts

Dessert "Pull me up"

Dessert a divine taste which happened to see on the channel STS. Leading the program was Ilona Bronevitskaya. Watching RTR and suddenly the channel is disconnected instead of turn on the channel STS. And so, because of this surprise, I learned two Italian recipe, (i.e. two consecutive days on Saturday and Sunday, the TV decided after the holidays to indulge my sweet tooth ). The first was the pie, "San Marino".

Ingredients for Dessert "Pull me up"

Step-by-step instruction of cooking Dessert "Pull me up" 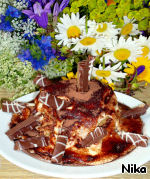 with cocoa and shock. candy. Was in a hurry to make reloading the bowl, kept the bowl in hot water. Slightly melted. As liquor was added to the Old Tallinn. Taste izyumitelny! 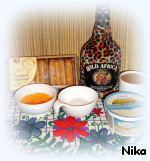 RUB the yolks with the sugar (sugar can be substituted sah. powder). Put mascarpone. Cream liqueur I divided in half, part in gelti and part in a Cup of coffee (the recipe requires only coffee).

Beat gently with a whisk. I churned at a slow speed with a mixer.

In cappuccino with liqueur put the cookies and then removed. Cookies put in a ramekin and cover, vzbeta yolk mass. And so to repeat twice. Bowl with dessert to put it in the refrigerator for three hours or so.

If you still give kremanku to stand in the refrigerator for desired time, then it is possible to cross the dessert in a bowl.

To the cobbler to put candy or cubes of chocolate. 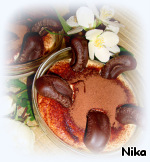 Tiramisu ready. Said Ilona, this dessert is such a bliss that would not otherwise say, like "Pull me up". Mind-blowing dessert!

Who has not tried it, try it! This is awesome delicious! :-P *THUMBS UP* 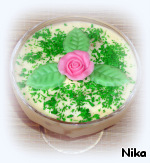 These two pieces I did today. With coconut and marzipan