Chocolate-chocolate cake and cheesecake-vanilla cream! Tender sour cream cake resembles a "Pancho" or "Curly boy", but less calories. The amount of fat and sugar, we tried to minimize. And here is the story that gave this cake a name. Our buddy gosh, sailor long voyage in this season remained without work. It was taken in regular flight because the insurance company made demand: dimensions of the members of the crew shall conform to the dimensions of the rescue equipment. And then, God forbid, happens to the sailor to sink, and he's wearing a vest does not converge, and the lifeline it does not fit. Measured, then, our response in the waist (or rather, where it should be). The result is 138 cm, and should be no more than 130 :). And left on the shore to lose weight. Before the next flight. For Gosha and everyone who fights for the waist - throw a lifeline! 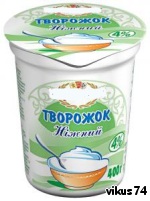 Liquid cheese sour cream consistency is our main ingredient, I took 2 large cans of 400 grams of fat content of 4%. If the same cheese you do not, you can replace it with thick unsweetened yoghurt.
At the time of preparation of the cheese should be at room temperature.

Mix eggs, half Cup sugar and the vanilla sugar Practica.

Whisk to dissolve the sugar.

Add the cocoa, flour and 200 grams of cottage cheese (half a tin), knead well and introduce a teaspoon of baking soda, slaked vinegar, stir again thoroughly.
The dough will be semi-liquid, bubbly.

Divide the dough into 2 unequal parts (about 2/5 and 3/5)
Cover the form with baking paper, even silicone. Bake cakes at temp. 180-190 deg. I was ready in 20-25 minutes. Try a toothpick, once dry - remove, do not desiccate. Cakes get spongy, elastic.
I baked in the convection oven, so had to turn each cake and additional 5-7 minutes to pester the bottom.

While baked cakes, prepare the cream.
Soak gelatin in boiled water, allow to swell and heat up on the stove, not boiling. When it is completely dissolved, add the remaining half Cup of sugar and vanilla sugar Practica.
I struggle with carbs went further and replaced the sugar 10 tablets of sweetener.

Spread the remaining cheese in a bowl (do not forget that cheese should not be cold). If separated some of the serum, it is better to merge.
Now pour in the hot gelatin-sugar syrup in a thin stream, stirring quickly and thoroughly.
Do not worry that the cream was quite runny, it will thicken later.
Beat with a mixer until the state of the cocktail (bubbles on the surface).

Cup cut out the center of a thinner crust circle.

A thick crust and a slice of thin cut into small pieces, I came up with approximately 2x2 cm

Put them on the bottom with the forms and pour a small amount of cream (if you did everything correctly, it still liquid and lukewarm).

Complete the pieces of cake form, generously pouring cream and clutching a spoon, so they soaked.

Slice the banana slices and place on top. Without the banana it is possible to do.

Pour the rest of the cream, it should cover the bananas.

Now place the cake and press his hands on the edges and the center should be a little cream
Put into the fridge for an hour.
After an hour, invert the cake on a dish to serve, remove the form (film remains on the cake) and leave for another hour or more. This is necessary in order for the cream not concentrated on the bottom of the mold and partly back down to the cake.
The cream turns into a jelly, it stays like a thick cream, so flip carefully.

Before serving, carefully remove the tape may leave a little cream, but overall, the cake retains its shape and is cut perfectly.