For the presentation of the week I chose a recipe of German cuisine under the name of Kasekuchen. Please do not confuse with cheesecake! Although in German it's the same "cheese cake". But there's no cheese at all, but only my favorite cheese. But! What is he in Kasekuchen gentle and affectionate! Bake this miracle is quite easy, and when your home will be filled with a magical aroma, your table will crown a ruddy, handsome, and on your plate snuggle a sweet triangle of delicious pie, even easier to imagine yourself at the table restaurant Schwarzwald hotel Traube Tonbach that Baiersbronn, picturesque climatic health resort of the Northern black forest. After all, there's a menu from chef Harold Wohlfahrt you, along with crawfish tails, green asparagus and coriander and flounder grilled with parsley and capers, you'll find Kaesekuchen. Remove the form with the dough from the refrigerator, pour it into the prepared stuffing. 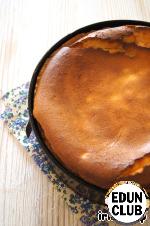 Bake in a preheated 180*C oven for 65-75 min.
Important! The oven 40 minutes do not open.
No less important! To give the cake to cool completely and then remove it from the mold and slice. Nice and cozy hanging out with you! Flour and butter from the refrigerator, cut into slices, chop into crumbs with a knife.
Add the powdered sugar, baking powder and egg and knead... 
Lyrical digression. Baking powder, no longer hoping for an industrial manufacturer, do itself, before baking by mixing one part flour and starch and two parts soda and citric acid. Sift the mixture and use on prescription. The result is consistently good. Divide the dough into two unequal parts, the smaller of which will be used for the production of DNA, one double - a side. Roll out between two films of the dough into the reservoir, removing the upper film, carefully transferred into the form (my form diameter - 21 cm) dough down, remove the second film. Similarly roll out the second piece of dough to form the rim of the pie. To remove the form with the dough in the cold. Start preparing the filling. The yolks, separating them from whites, grind with the icing sugar and vanilla sugar white. Use for this purpose the mixer. Add the cheese, pre-grated through a sieve or a broken blender, and starch, mix well. Add the cream and stir again.
I all stages of using the mixer.
A few words about the cheese. In my opinion, it needs to be fat, anyway, not low fat. This high-calorie bakery, which is based on the shortbread dough, and filling a decent amount of cream, so try to cut the calories due to the cheese at the lesson of the naive and the taste worsens. 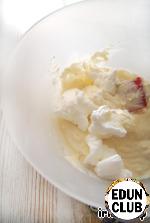 Beat the egg whites until stable peaks and enter them into the cheese-yolk mass.
About whisking egg whites, "a lot of songs piled," will allow to repeat what I always keep. Almost always.
Utensils. In any case, low-fat (lemon juice, for example) and dry. The same applies to the nozzles on the mixer.
Raw materials. Of course, the whites should and the hint is not to have the yolk inclusions. To avoid such, each egg is divided into components, tested proteins result in the dish for whipping one by one.
Room temperature. Not cool whites for whipping, on the contrary, kept them some time at room temperature. After all, we need positive and lasting results, not quick setting foam.
Speed. The beginning of the work correspond to a small speed of the mixer, which we turn whites into a rich foam (you can pre-add a pinch of salt or few drops of lemon juice, truth to say, I do not always). Then increase the speed to maximum and whisk until it has a smooth, silky, dense mass, which are not falling "peaks". It is important not to overdo it, to beat the mass did not become "lumpy" and was turned into a dry foam. 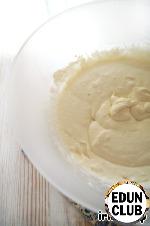 A third of the beaten egg whites to put on the cheese-yolk mass and stir with a spatula. Enter the remaining whites and carefully mix with a folding motion, turning the bowl with your free hand. Ossetian pie with pumpkin and cheese
131 - 60м 6
Very simple and very tasty! Cheese pie Gorgonzola. Of course, this cheese can be replaced by another, according to your taste. Most importantly, the idea! Pies of puff pastry "Fishки-2"
226 - 40м 6
Prepare for a special occasion delicious crispy cakes with rice and salmon, which emphasizes cranberry sauce. I really liked the molding of the cakes (for the idea thank you "cook" Lorhen) instead of the usual pies turn out cute "pastega" in the form of fish. Cakes
188 4 - -
Optional stuffing can be added and fried onions. The minced meat.