After the first pie immediately offer to your attention another and also on a shortbread crust. Offer boldly, because they are totally different. Only one thing unites them - according to the high taste characteristics, this baking and even worthy of the holiday table, unless, of course, the occasion a small home, a narrow circle. So pie, which takes us to the England of the late nineteenth century, in the town, or rather village of Bakewell in Derbyshire, has seen the light thanks, as it often happens, a culinary misstep. In our day, James Trevor Oliver, this revolutionary in the kitchen, reinterpreted traditional English cakes and gave it a new meaning. With this option I want to introduce you. 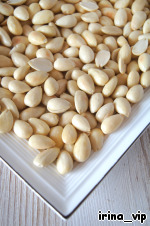 The almonds should be put in a bowl and pour boiling water for 10 minutes. Drain the water, pour cold. After such contrasts the nucleus from the skin of a flying bullet.
Sometimes nuts (strictly speaking, not nuts, and fruit) come across dry and skin is coming off badly, then water treatments need to be repeated and will succeed.
Now almonds need to be dried. To do this, put the nuts on a baking sheet in a preheated oven at 100*C, with the door open, 20-25-30 minutes.
And you can dry naturally, lay on a towel and leaving for a day or two.
But we have no time, and therefore dried in the oven and left to cool. 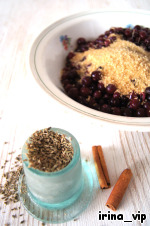 Meanwhile, let us cranberry jam. Here everything is plain and simple.
Cranberries, it can be fresh or frozen, place in a saucepan, cover with sugar, add half a teaspoon of ground cinnamon and star anise. A few berries aside for decoration.
And with the spices I have the opposite problem - planed cinnamon, and anise, not the star and seeds. 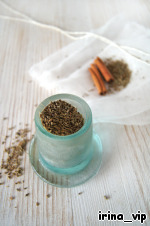 But we shall not hesitate. We spices in a bag put, thread and tie in a jam down, and at the end of cooking take. 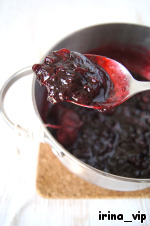 Cook the jam over medium heat, stirring from time to time, until thick.
At the end of cooking the jam a bit I broke immersion blender, so I like - not love cranberry skins. 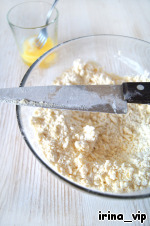 Almonds are still cooling, and therefore proceed to the preparation of dough.
You can prepare on their own time-tested recipe, and you can trust me to cook this because it is very tasty, crispy and not greasy (as it can be low-fat shortcrust pastry).
Sifted flour chop with a knife with butter crumbs, add powdered sugar, mix well. 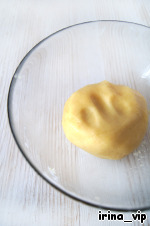 Yolks of two eggs, whisk with a fork with vanilla sugar, pour in a little flour, knead the dough. 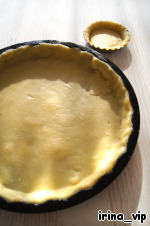 Roll the dough between two pieces of cling film, shoot a test form, pre-lubricated with oil, and remove it for an hour in the fridge.
I baked a cake in the form for the tart with low sides, with a diameter of 26 see 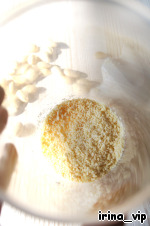 Almond is cold - grind it into flour.
I worked the immersion blender, poured into a glass 20-30g of almonds and percussive movements for 10-12 seconds. broke portion. Poured into a bowl and proceeded to the next party, do not forget to clean the blades of the blender from nut mass. 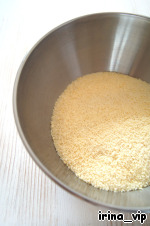 The process is fast, almond crumb does not have time for such a short time to heat up and stick together, more importantly, grind the almonds in small portions - this is a guarantee of success. 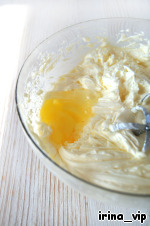 The softened butter vzbit with sugar powder in a magnificent mass, add the eggs one by one whisking each time until smooth. 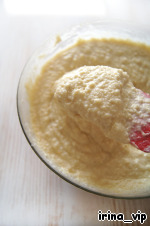 To connect with oil a lot with almond flour to a smooth cream. Put into the refrigerator.
Jamie Oliver offers to add in frangipan a little bit of alcohol - Calvados or Cointreau.
I lacked even the banal cognac, but because my "Bakewell" soft. 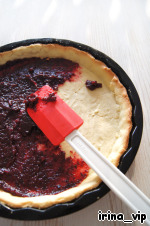 So I immediately smeared the bottom of the pie cranberry jam, 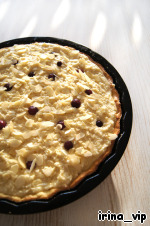 ... laid out over Frangipane mass, carefully preserved cranberries, sprinkled almond in the oven for 45-55 minutes, until the intense sun of our "Bakewell". 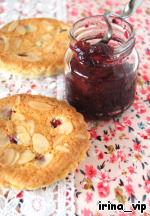 I should say that the tarts were ready much earlier, after 20 minutes.
While the pie is baked, prepare the frosting. To do this, squeeze the juice of half an orange, grate the zest, add the sugar and boil. After the glaze has cooled, apply to pie chaotic lines, deliberately casual.