Very tasty sauce - the basis to any meat dish, and just a great spread on bread.

Finely chop the onion, grate the carrots. The tomatoes cook for a few minutes in boiling water until they peel not crack. Drain the water and allow them to cool.

Eggplant(s) cut in half and RUB the cut with salt. Set aside. When the tomatoes are cool, remove peel and cut into pieces. Here it is possible especially not to try. If your tomatoes are not ripe (as was I), be sure to remove the hard centre and all the greens is in any case not cooked to the desired extent and will have to dig later.

Washed peppers spread on a baking sheet and bake 40 minutes at 180 degrees. They should be wrinkled, but not too much. If you are afraid that will burn from the bottom - put the temperature lower. So they should look like.

Onion fry until transparent in perekalennoe oil, add the carrots and stir-fry.

Tomatoes with a slotted spoon to fish out the resulting juice and put in a pan to the onions. Well, if it is deep. Simmer on medium heat for an hour, if necessary, gradually adding the liquid, NATEXPO tomato.

Add vegetable oil, sugar and salt, paprika and allspice and cook for another 20 minutes. Try. If not salty or too sour from the tomato, add salt and sugar in the second case. The end result is cool. It can be processed in a blender, RUB through a sieve or leave it. I half left and half rubbed. Pureed version. Harvesting eggplants
0.7k - 50м -
During the summer of workpieces labor. A lot of effort is required for processing of the crop into useful and tasty winter supplies. A great solution is freeze fresh vegetables, but unfortunately, not all of them after defrosting remain attractive. Eggplant, frozen raw, almost impossible to use - they have a bitter taste are unattractive "rubber" structure. Output - freeze already baked vegetables. Offer a fast and easy method blanks Blues. Cabbage "tomorrow they"
0.6k - 30м -
I want to surprise You with a very quick recipe for pickled cauliflower. It's very quick and very tasty! Jam strawberry
365 - 40м -
Very simple and quick to prepare. This jam is for me a lifesaver in the spring, winter and autumn, when there is no in the garden strawberries. Jam not undergo heat treatment and therefore retains all the vitamins and flavor of summer. It can be used for creams, soufflés, as a layer for cakes cakes. Add a couple tablespoons of yogurt to get yogurt, etc. 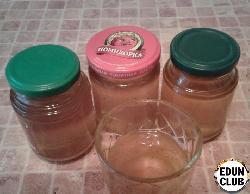 Mint syrup
455 - 30м 6
I propose to make a fragrant mint syrup. It takes time, however in winter you will fully be able to enjoy a glass of mint tea. In addition, there are many options for its use, ranging from drinks to add to cakes and desserts. Aromatic salt with the zest and rosemary
461 - 5м -
I think we need some sweets! Tonight cooked spicy salt. You have probably already met this on the shelves of the store, or do it yourself – the variations are many, as spicy compounds. Why the salt? Firstly, its like the previous recipes, you can prepare in advance. Secondly, for instance, you want to give to a friend beautiful jars. Don't let them give! But if sister, mom or colleagues ordered a spice mill. And then you need to go creative! Fill empty containers are beautiful, tasty and healthy salt. Source tasty_mama.