Incomprehensible form a pasty mixture, which has always been found on tables in Turkey with a taste of light haze liked a lot... and the name... Baba ganoush... so what?... It was only later I found out that the woman they have is not our Slavic woman at all!... and the man... my father, actually... and he Ganush! or angry, or upset.. 't found an explanation in the Internet about the dish... maybe angry that no teeth? and angry dad made specially completely frayed?...

Ingredients for The babaganoush was

Step by step instruction of cooking The babaganoush was 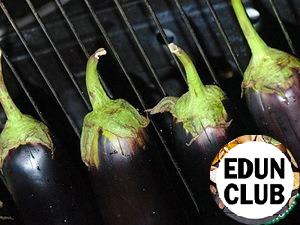 Eggplants wash, wipe and bake, preferably on an open fire, I in the oven... the upper grill... almost a fire. 20 minutes... While I was pondering, whose father Ali Baba, eggplant ready... One burst from happiness. But it was possible with a fork prick, so as not to explode. Clear now skin and RUB the flesh well, you can with a fork. Season with lemon juice, salt, a little crushed garlic and oil. All mix well and add the tahini paste, because it gives such vospominaniya Eastern touch.

All... of parsley for decoration and a very light and delicious, this sandwich proves again that they know how to cook Turkey)) Cheese appetizer
180 5 120м 10
In the fridge "frozen" remnants of cheese that are starting to dry up. Well not to throw out such "wealth". A few additional ingredients and a little imagination - and a snack: here it is. You are welcome!!

Mixed colors rolls
132 3.5 20м 10
On the festive table, these rolls will be the trick, will leave on time. A great low-calorie snack that is only 140 calories. Ingredients a lot, but it's worth it. I propose to try to eat. Snack "simple" or "Vosmerochka"
141 - 40м 6
Simple to prepare and very tasty snack "simple" will help you in the short term to feed the guests in the summer, not go hungry themselves in the winter evening! Why "eight"? Because all the components cut into 8 pieces... Perhaps fit for the contest "Vegetable traffic light" Peppers with tuna, anchovies and capers
245 4 - -
Spicy snack. It is possible to preserve. Crusty loaf baked with garlic and cheese
266 3 25м 2
It is possible to take to barbecues. But it tastes better warm, when making crunchy, and the cheese inside is still wet and stretches a little. "Squirrel" from "Mivina"
173 - 15м 5
This recipe is much cheaper, "squirrels" of this, we call a savoury snack of hard cheese, processed cheese, butter, garlic and mayonnaise. As you can see, components are more expensive. "Mivina" - noodles of fast preparation. There are many other types whose names I do not know, but Poland did exactly the same melinopterus Polish dish of vermicelli. Fans of spicy is the dish for YOU !!!