Braid with cinnamon or sweet bread I've never seen more beautiful and not the failure of braids tastes better with cinnamon! Your home will be filled with a pleasant aroma, and Pets will be surprised by your skills, although is actually absolutely nothing complicated in cooking!!! (Recipe taken from the American web site)

Ingredients for Braid with cinnamon or sweet bread Mix the yeast and sugar (1 tbsp. lodges.) in warm milk and leave for a few minutes until the yeast rises with bubbles and foam.

Add egg yolk, melted butter (100g), the flour and salt and knead the dough. (I did in the bread maker - mode "batter"). Put the dough in a large, greased bowl, then cover and put in a warm place. Let rise twice (about 1 hour). Who kneads in a bread machine, shift is not necessary.

Roll out a layer of dough thickness of 1 cm.

Lube the dough with melted butter.

And sprinkle with mixture of cinnamon and sugar. Roll the dough into a roll. Cut the roll along into 2 halves Make a round shape and place onto a baking sheet, greased. Brush the top with remaining butter and sprinkle with mixture of sugar and cinnamon. In the oven, after 5 minutes, reduce oven temperature to 180C. Bake 30-35 minutes, the top will become Golden brown. Here is a brief, but very clear instruction from the site where to get the recipe. 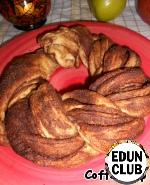 Pumpkin bread "Amber"
174 - - 10
Greetings to all chefs! For many years I am a frequent visitor to the Cook. Not a day goes by that I don't look to your favorite place. I have long planned to put her recipes, but somehow did not dare. Then no, mood. And then, finally, decided. I suggest you try and appreciate bright and flavorful delicious bread in my recipe. Besides the fact that the bread turns out beautiful, not to mention its utility: included with flax seeds and bran are beneficial to the digestion, regulate the gastro-intestinal tract, remove cholesterol, reduce blood sugar, perfectly saturated, preventing the desire to throw something into the stomach. I would be glad if my recipe will be useful to someone! Bread "Daisy"
161 - - 7
Recently remembered the bread, who loved in his childhood! I wanted to bake... And a recipe on our website not found... I am very surprised! I looked on the Internet and here is the result... a delicious, soft sweet bread. It is possible to break it - the bread, and cut! My husband loved it, said that she wants always have this bread for Breakfast with butter and cheese ))) Simple yet delicious and beautiful wheat bread Soviet times. A loaf of sliced according to GOST
187 - - -
If you remember the guests, not to mention the loaves and bread. Probably everyone remembers the sliced loaves: soft and chewy with great flavor! As a kid I loved eating this bread with raspberry jam or eat them with yogurt. What vkusnota! Bread useful
184 - 35м 8
Hlebushek, which will be of interest to those who follow the figure. Supplements can be quite different to your taste. Baked without yeast. And still comfortable in the house when the bread is finished, and to go to the store reluctance))) As I have today.
More recipes