Soup-puree with zucchini and fennel Very nice vegetable soup with a light aroma of fennel. Preparing elementary, the taste at the same time - sophisticated.

Ingredients for Soup-puree with zucchini and fennel

In a large pot heat the 1.5 tablespoons of olive oil, put the onion, then chopped the fennel and zucchini, add the fennel seeds. Simmer, stirring occasionally, about 10 minutes.

Pour into the pan broth and bring to a boil. Cover and cook on low heat for 15 minutes.

Remove from heat, season with salt and pepper. I have a seasoning mixture of peppers with ground coriander. Blend immersion blender.

Cherry tomatoes (today I have the usual, but with cherry taste better) cut into quarters. In skillet, heat 0.5 spoons of oil, put the tomatoes, heat them on low heat for about 2 minutes, turn off, add the chopped dill. A quick soup from a sausage
234 - 30м 3
Recipe from the category of simple. Cooked very quickly. Soup with buckwheat and mushrooms
115 - - 3
Easy, hearty and flavorful soup will warm You on a rainy day. Nice!!! Japanese soup
161 - 15м 5
One of the options for Japanese soup. Ready in 15 minutes, and the result is excellent. Try and sure You will like it. Sauce soup
325 3 50м 6
I often make this soup to children, and the sauce because thick. And cook very quickly. 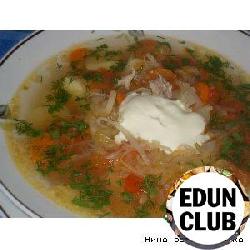 Peasant soup
216 - - -
Very tasty soup with lots of different vegetables. You can cook both in the fasting and meatless version. 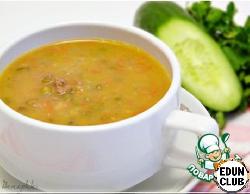 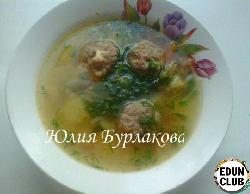 Potato soup with buckwheat dumplings
105 - 30м -
The site has a lot of delicious recipes of soups with meatballs, I reviewed all of them and have decided to offer You my version of the recipe that I use for several years. Tasty buckwheat-meat meatballs with cheese filling perfectly with coarsely chopped potatoes from the soup and complement each other. This soup always helps me. Soup with meatballs and egg rice pancakes
229 - - -
Soup with vegetables, meatballs and "noodles" pancakes. Hearty and delicious. "Heard" that there is ladies on the Dukan diet - so, if pancakes make just the egg, it is quite possible to have phase rotation, and if someone eats on the system of -60, the soup is also perfect - there are no forbidden combinations.
More recipes