When I first saw this recipe, very surprised. Cinnamon? With eggplant and tomatoes? But risk has to cook and do not regret it. Very tasty and unusual combination. Help yourself.

Ingredients for Eggplant, baked in tomato and cinnamon sauce

Step by step instruction of cooking Eggplant, baked in tomato and cinnamon sauce 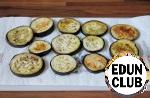 Then they are a little dry, fry in olive oil on each side until Golden brown and put on paper towel.

While the eggplants are roasting, make sauce. Garlic peel and crush with a knife blade. Of course, you can use the frog or chop it up. But I in this recipe like roasted garlic. :-[

With tomatoes remove the skin and finely chop.

Fry the garlic until light Golden brown in olive oil.

To garlic add the tomatoes, broth. Leave them for 15 minutes on low heat. At the end add the paprika and cinnamon and saute for 5 minutes.

The form greased with olive oil, place some eggplant. 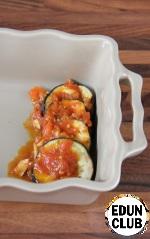 Eggplants - a few spoonfuls of the sauce.

Alternate until the vegetables and sauce over. Gratin of zucchini
249 - 40м 4
This year a bumper crop of zucchini, don't have time to process. Offer you a recipe or gratins, simply put, casseroles, peeped I adored Jamie Oliver, with the addition of favorite soy sauce TM Kikkoman. The author notes that the recipe belongs to the country kitchen. Scout
316 5 60м 4
Many chronometric indicate that the first potatoes have appeared 8000 years ago (6000 years BC) to the mountain plateau between Cusco and lake Titicaca. Golden baked potatoes with meat
151 - 40м 4
Golden potatoes with rosemary, garlic, ginger and dried meat, with a crispy crust, easy to prepare, full side dish that always goes on "cheers!" Cauliflower and cheese
176 3 30м 6
Very simple and tasty dish for fans of cauliflower. Like many recipes, but I hope this is not)) Sorry for the quality, photos from your phone... Roasted carrots
214 3 - -
A couple of times saw the recipe on television. I decided to try, instead of the traditional potatoes to make some carrots. While it was baked, the smell in the apartment was indescribable. I must say that this dish was liked by all, and even baby picky. Recommend.